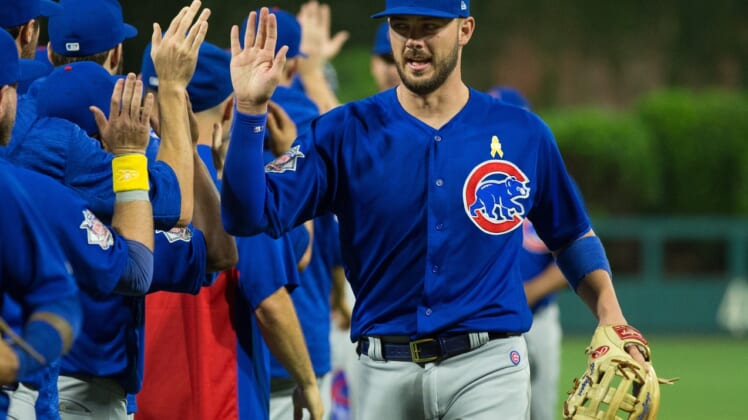 After entering May with a .237 batting average, Chicago Cubs third baseman Kris Bryant now seems pretty locked in at the plate after an incredible accomplishment on Friday night.

The All-Star slugger continued his torrid stretch in May into Friday night with an incredible three-homer in three consecutive innings against the Washington Nationals in a blowout victory.

Bryant’s first blast came in the seventh inning when he uncorked a two-run shot off relief pitcher Justin Miller. He’d come around again in the eighth inning and deliver a solo shot to give the Cubs an 8-4 lead.

Clearly, Bryant wasn’t done yet and he got one more chance to be a part of the three-homer club in the 9th inning. After battling in a lengthy at-bat, he drilled another two-run blast into the seats on the eighth pitch to cap off his incredible night.

Bryant, who finished April with only three home runs, now sits at 11 home runs on the year. Friday’s four-hit performance raised his batting average to .277 and it’s becoming quite clear the MVP-caliber bat is back in the middle of Chicago’s lineup.