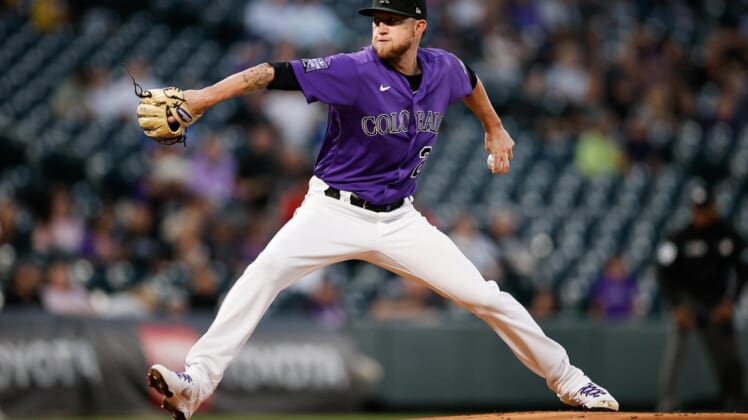 Trevor Story homered and doubled and Elias Diaz also had two hits as the Colorado Rockies beat the Washington Nationals 3-1 in Denver on Tuesday night.

Kyle Freeland (7-8) took a shutout into the seventh inning before faltering. His last two wins have come against the Nationals and he has allowed just one run in 12 2/3 innings against them. Freeland gave up one run in 6 2/3 innings, allowing six hits and walking four while striking out three.

Carlos Estevez pitched the ninth for his 10th save in 15 chances as Colorado (72-85) stopped a five-game losing streak, which came at home.

Ryan Zimmerman had two hits on his 37th birthday for the Nationals (65-93), who couldn’t back a strong start from starter Patrick Corbin (9-16). He allowed two runs on six hits and tied his season best with nine strikeouts.

The Rockies got a runner to third in the third inning but didn’t break through until the fourth. With one out, C.J. Cron walked and went to second on a single by Diaz.

Ryan McMahon followed with a double to bring home Cron with the first run of the game. Corbin intentionally walked Sam Hilliard to load the bases for Freeland, who struck out to end the inning.

Story made it 2-0 when he crushed a ball 475 feet to dead center with two outs in the fifth. It was his 24th home run of the season.

Washington finally eked out a run against Freeland in the seventh. With one out, Yadiel Hernandez and Carter Kieboom singled; and, after a flyout, Josh Bell hit for Corbin and drew a walk to load the bases.

Freeland had Lane Thomas down 0-2 in the count but threw four straight balls to walk in a run. Tyler Kinley came on and got the final out to keep Colorado in the lead.

The Rockies got the run back in the bottom of the inning. Raimel Tapia led off with a pinch-hit triple to center and, one out later, Brendan Rodgers doubled to right to drive him in.