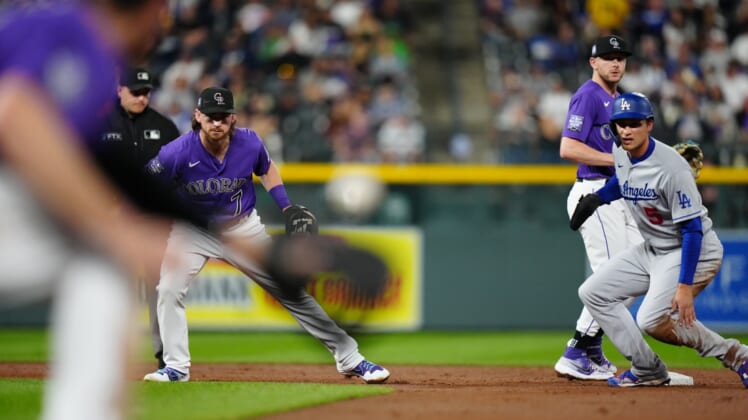 Luke Raley hit a two-run homer for Los Angeles (97-55), which lost for just the second time in 11 games. The Dodgers began the night one game behind the first-place San Francisco Giants in the National League West.

The game was scoreless through three innings, but the offenses woke up in the fourth. Los Angeles struck first when Justin Turner singled with one out, went to second on a wild pitch and scored on a two-out double by Gavin Lux. Raley followed with his second home run to put the Dodgers ahead 3-0.

Colorado came right back in its half of the fourth. Rodgers led off with a homer, his 14th, and Blackmon, Story and Cron singled to load the bases. McMahon drove in two with the fourth straight single, and two outs later, starting pitcher German Marquez doubled to right-center field to knock in two and put the Rockies ahead 5-3.

That was it for Los Angeles starter Walker Buehler, who allowed five runs on seven hits in 3 2/3 innings. He struck out two without walking a batter.

Robert Stephenson (2-1) came on and gave up a sacrifice fly to Justin Turner to tie it at 5-5, but Blackmon threw out Trea Turner at second for a double play.

Colorado retook the lead in the bottom of the inning. Rodgers singled and Blackmon was hit by a pitch, leading to the Dodgers removing reliever Justin Bruihl (0-1) in favor of Brusdar Gaterol. Story followed with a go-ahead single.

The Rockies padded the lead in the seventh. Blackmon reached on an error by pitcher Alex Vesia and scored from first on Cron’s double, his second of the night and fourth in the last two games. With two outs, Elias Diaz was walked intentionally and Hilliard homered to center, his 12th of the year.