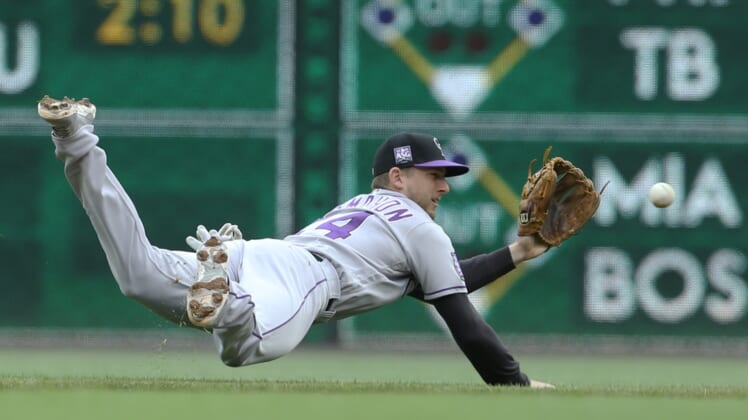 Matt Adams’ go-ahead RBI single in the ninth inning Sunday helped the visiting Colorado Rockies snap a five-game skid with a 4-3 win over the Pittsburgh Pirates.

Trailing 3-2 in the ninth inning, Colorado’s Ryan McMahon walked with one out against Richard Rodriguez (3-1) and scored the tying run on Charlie Blackmon’s double off the wall in right-center. Adams’ single to center brought home Blackmon.

Blackmon added an RBI triple for the Rockies, who are just 4-22 on the road.

Colorado starter Kyle Freeland, in his second start after coming off the injured list, pitched four innings. He gave up three runs and five hits with four walks and one strikeout.

Adam Frazier doubled and drove in two runs for the Pirates and Ka’ai Tom added an RBI single as Pittsburgh has lost seven of nine.

Chase De Jong, making his Pirates debut, pitched into the sixth, allowing one run and three hits with two walks and five strikeouts.

In the third, Tom led off for Pittsburgh with a walk and De Jong, in his first career at-bat, bunted him to second. Frazier doubled to right-center for a 1-0 lead.

Colorado tied it in the fourth. Yonathan Daza opened with a single to center for the Rockies’ first hit. After McMahon struck out, Blackmon tripled to right-center to bring in Daza.

In the bottom of the fourth, Gregory Polanco singled to right-center and moved to second on Will Craig’s single up the middle. Erik Gonzalez walked to load the bases. Tom grounded to Adams at first and beat Adams to the bag as Polanco scored to give the Pirates a 2-1 lead.

After De Jong struck out, Craig scored on Frazier’s groundout to give the Pirates a 3-1 lead.

In the eighth against Kyle Crick, Blackmon doubled to right-center and went to third on a wild pitch. Joshua Fuentes walked, Adams struck out and Brendan Rodgers was hit with a pitch. Crick struck out Dom Nunez but walked pinch-hitter C.J. Cron to force in a run and make it 3-2.