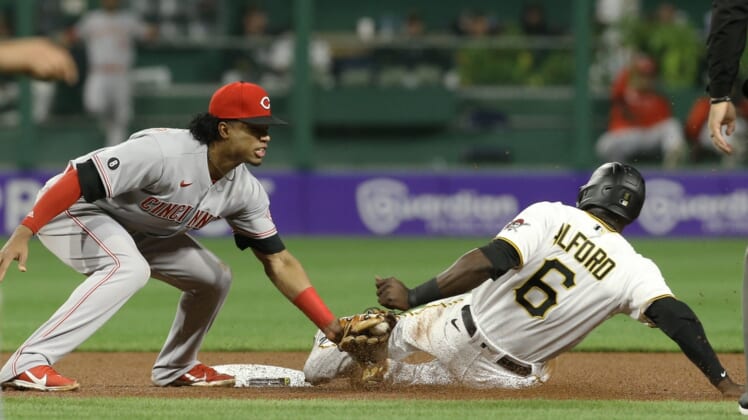 Tucker also tripled and scored and made two stellar defensive plays. Kevin Newman added a two-run single, Hoy Park an RBI single for the Pirates (60-100), who had lost two straight.

Pittsburgh starter Wil Crowe allowed one hit in six shutout innings. He struck out nine, walked two and retired the final 12 batters he faced. The one hit he allowed was a single to opposing starter Luis Castillo in the third.

Chris Stratton (7-1) gave up a run in the eighth for the Pirates.

Jose Barrero had an RBI triple, Max Schrock an RBI single for the Reds (82-78), who have lost three straight.

Castillo gave up one run and six hits in 5 1/3 innings, with three walks and five strikeouts.

Amir Garrett (0-4) allowed two runs in the eighth for the Reds.

Tucker led off the game with a triple to right-center and scored on Yoshi Tsutsugo’s groundout for a 1-0 Pittsburgh lead.

Tucker’s second strong defensive play – he made a diving catch in foul territory in the third – came in the seventh. Eugenio Suarez singled to center with one out. Tucker Barnhart lofted the ball to shallow right, where Tucker ranged out from second to make a lunging, over-the-shoulder catch, then came out of a tumble and doubled Suarez off first.

In the eighth, Cincinnati’s TJ Friedl walked with one out. Pinch-hitter Tyler Stephenson grounded to shortstop, where Newman opted to go to second. Friedl was safe. An out later, Schrock singled to right to drive in Friedl for a 1-1 tie.

In the bottom of the eighth, Tsutsugo singled to left. One out later, Colin Moran singled to right. Michael Lorenzen relieved Garrett. Anthony Alford singled on a ball that Stephenson – playing left field for the first time – couldn’t handle to load the bases. Tsutsugo scored on a wild pitch by Lorenzen.

Barrero’s RBI triple in the ninth made it 9-2.