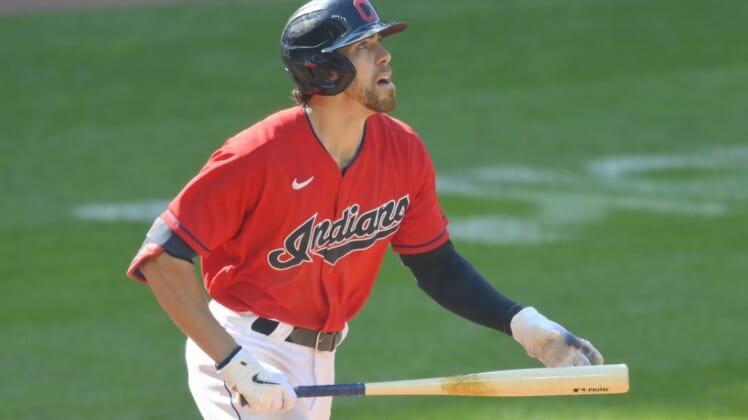 Amed Rosario went 4-for-5 with three RBIs as the Cleveland Indians defeated the visiting Kansas City Royals 8-3 on Monday afternoon in a makeup game from a Sept. 22 rainout.

Kansas City’s Salvador Perez was 2-for-4 and drove in two runs, raising his major league-leading total to 117 RBIs.

The Indians (77-79) concluded the home portion of their schedule at 40-41. The top two batters in their lineup — Myles Straw and Rosario — went 6-for-10 with four runs scored.

The clubs will now head to Kansas City to begin a three-game series Tuesday.

Cal Quantrill (8-3) was the winning pitcher. He allowed three runs on six hits in six innings. He struck out five and didn’t walk anyone.

The Royals got on board in the first on Perez’s RBI double, scoring Nicky Lopez.

It took the Indians three pitches to tie the score in the bottom of the inning. Straw hit a 1-0 pitch for a double, and Rosario hit the first pitch he saw for a ground-rule double, scoring Straw. Franmil Reyes’ sacrifice fly scored Rosario.

The Indians got another run in the second with another pair of doubles. Bradley Zimmer hit a one-out double and then scored on Andres Gimenez’s two-out double.

Perez was back at it in the third, with a line drive that got past Rosario at short, driving in Kyle Isbel and cutting the Indians’ lead to 3-2. Andrew Benintendi then doubled in Perez with the tying run.

Rosario led off the third with a solo home run to give Cleveland another lead.

The Indians loaded the bases with no outs in the fifth, but managed just one run on a fielder’s choice by Bobby Bradley. Rosario’s fourth hit drove in Zimmer with the sixth run in the sixth.

Zimmer’s home run off his brother Kyle was part of a two-run Cleveland eighth.