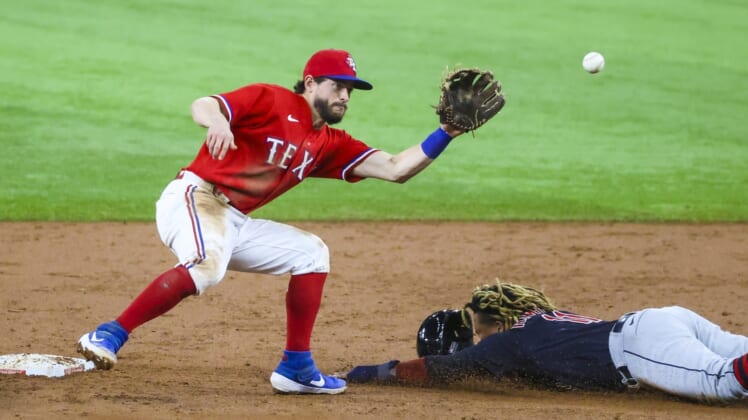 Jose Ramirez drove in three runs to lift the Cleveland Indians to a 9-6 victory over the Texas Rangers on Friday in Arlington, Texas.

Ramirez had a two-run single to cap Cleveland’s four-run third inning before adding an RBI single as part of a five-run fourth.

Austin Hedges and Bobby Bradley each belted a solo homer, and Harold Ramirez drove in two runs to send the Indians (79-81) to their second straight win.

The offensive explosion was more than enough for rookie Eli Morgan (5-7), who won his third consecutive start after allowing four runs on seven hits in 5 2/3 innings.

Texas seized a 2-0 lead in the second inning after Andy Ibanez ripped an RBI double and scored two batters later on Nick Solak’s single to center.

Cleveland responded in the third inning, with Hedges launching a solo shot — his 10th homer of the season. Andres Gimenez scored on a wild pitch by Spencer Howard (0-5), and Jose Ramirez followed with a two-run single to center field to give the Indians a 4-2 lead.

Kiner-Falefa led off the bottom of the third by halving the deficit with his eighth homer of the season and first since Aug. 8. The Indians answered by putting the game away in the fourth.

Bradley belted his 16th homer of the season, and Amed Rosario’s single plated Hedges to chase Howard from the game. Jose Ramirez greeted Kolby Allard with an RBI single, before Harold Ramirez added a two-run single to extend the Indians’ advantage to 9-3.

Howard was charged with eight runs (five earned) on five hits — including two homers — in 3 2/3 innings. He walked three and struck out two.

Lowe belted a solo shot in the sixth to cut Cleveland’s lead to 9-4. It was Lowe’s 18th homer of the season and third in his last seven games.

Three Indians relievers bridged the gap to Blake Parker, who overcame Trevino’s blast to get the final three outs to end the game.