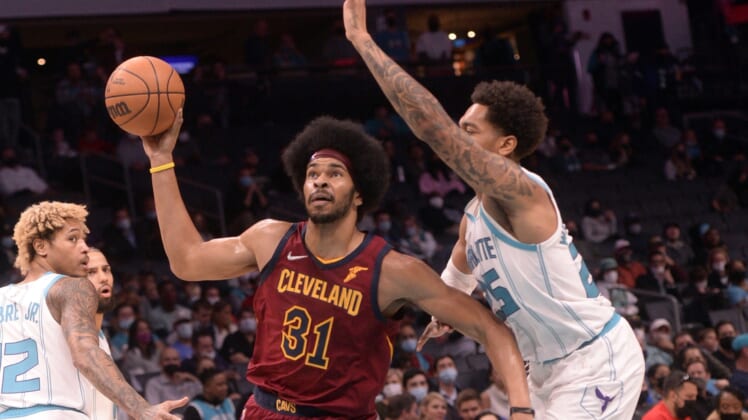 Jarrett Allen scored 24 points and grabbed 16 rebounds as the Cleveland Cavaliers concluded a challenging road trip with a 113-110 victory against the Charlotte Hornets on Monday night.

Lauri Markkanen provided 21 points and Collin Sexton added 17 points for the Cavaliers, who had to hold off a furious rally from Charlotte.

Cleveland’s Darius Garland, who made clutch free throws, ended with 16 points and Evan Mobley posted 15 points and 10 rebounds. Cedi Osman poured in 13 points off the bench, making four of his five 3-point attempts.

LaMelo Ball’s 30 points and Terry Rozier’s 23 points paced the Hornets, who were coming off a victory against the Portland Trail Blazers a night earlier. P.J. Washington had 18 points off the bench, Miles Bridges chipped in with 13 points and a team-high nine rebounds and Cody Martin added 10 points for Charlotte.

The Hornets used a 10-0 run midway through the fourth quarter to close within 101-94. Markkanen’s 3-pointer ended the rally.

Allen made three of four free-throw attempts in the last two minutes, but Rozier’s layup trimmed the gap to 110-108 with 20.2 seconds left. Garland responded with a pair of free throws and later sank another foul shot before Bridges’ potential tying heave was off the mark.

Cleveland, which wrapped up a 3-2, coast-to-coast road trip, has won four of its last six games.

The Cavaliers sizzled early on, building a 40-21 bulge through the first quarter.

By halftime, the Hornets had more 3-point baskets and more rebounds than Cleveland, but that didn’t matter. Allen made eight of his nine shots from the field while scoring 17 first-half points. Charlotte committed 13 turnovers before the break.

All five Cleveland starters held double-digit point totals by midway through the third quarter. Just two nights earlier in a loss at Phoenix, the top scorer and rebounder for the Cavaliers both came off the bench.

It was the second meeting of the season between the teams, with the Hornets having won in each team’s second game of the season on Oct. 22 in Cleveland.