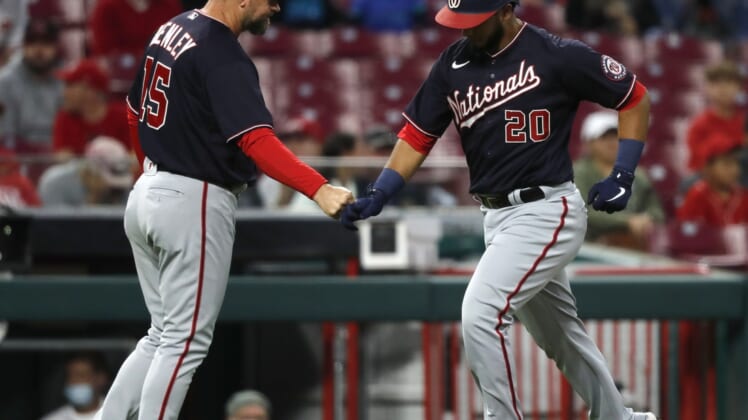 Nick Castellanos clubbed his 30th homer and Aristides Aquino hit a game-winning single in the bottom of the 11th inning to lead the Cincinnati Reds past the visiting Washington Nationals 8-7 on Friday.

The Nationals tied the game with a three-run, two-out rally in the ninth against Reds closer Mychal Givens, who retired the first two batters he faced before allowing five consecutive batters to reach. Luis Garcia singled home two runs to level the score 7-7.

Garcia was again at the plate with the bases loaded in the top of the 11th when Joey Votto fielded his two-out grounder and beat Garcia to the bag by a half-step to keep the game tied.

In the bottom of the inning, Aquino hit a leadoff single against Mason Thompson (1-2) to drive in automatic runner TJ Friedl from second base.

The Reds (79-75) had dropped their past six extra-inning games. Despite the win, Cincinnati fell six games behind the Cardinals (85-69) in the race for the second National League wild card after St. Louis swept a doubleheader from the Chicago Cubs.

Castellanos tied the game in the sixth with a homer off reliever Alberto Baldonado, and Eugenio Suarez connected for his 28th, a two-run homer that put Cincinnati ahead 6-4 later in the inning. The Reds took a 7-4 lead to the ninth before the Nationals rallied.

Max Schrock and Delino DeShields also homered for the Reds, who won improved to 3-4 on their 10-game homestand.

Keibert Ruiz and Alcides Escobar homered for the Nationals, who built a 4-0 lead. Washington starter Paolo Espino was pulled after five innings, having allowed three runs on five hits and no walks with two strikeouts.

Juan Soto broke an Expos/Nationals franchise record by reaching base 12 straight times when he walked on each of his first three plate appearances. Soto struck out looking against reliever Amir Garrett in the fifth to end his run.