Jose Cifuentes scored in the first half and Diego Rossi added the clincher late as the visiting Los Angeles FC outlasted Austin FC 2-0 on Wednesday.

LAFC looked as if it got a 25th-minute goal by Carlos Vela, but the tally was disallowed after a video review showed that Raheem Edwards had committed a foul on the run-up.

LAFC (5-4-3, 18 points) scored a goal that counted 14 minutes later, as Cifuentes pounded home the rebound of a shot by Kim Moon-Hwan. Moon-Hwan took an entry pass from Eduard Atuesta and ripped a shot that Austin goalie Brad Stuver stopped. However, the ball bounced right to Cifuentes, who made short work of the opportunity.

It was the first time Austin FC trailed during the first four matches in its home stadium.

Rossi doubled the lead in the 89th minute, corralling a pass from Vela on a breakaway and steadying the ball once before beating Stuver to the bottom right corner.

Austin (3-6-4, 13 points) was shut out for the eighth time this season. AFC have scored just 10 goals on its their matches, nearly half of them in a 4-1 win against the Portland Timbers on Saturday. 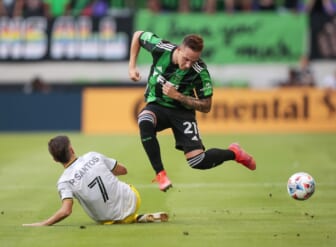 Austin had an perhaps its best chance to tie the match in the 74th minute when Alexander Ring’s header on a corner kick by Zan Kolmanic went just wide of the net.