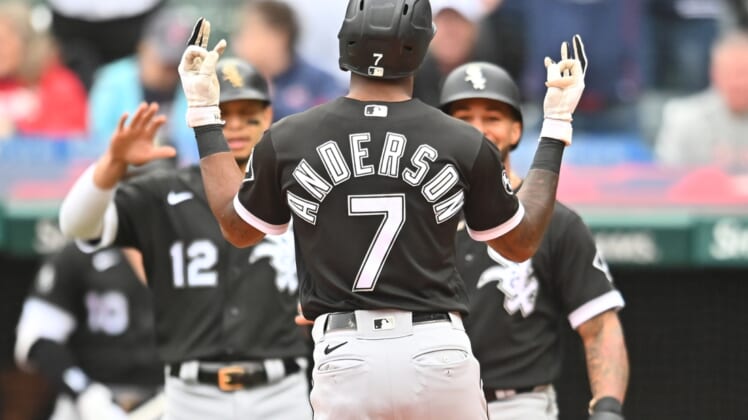 Tim Anderson homered twice to help the visiting Chicago White Sox clinch the American League Central title with a 7-2 victory over the Cleveland Indians on Thursday in the opener of a doubleheader.

Anderson led off the game with a homer and added a three-run shot to highlight a six-run second inning for the White Sox (86-66), who won their first division title since 2008.

Austin Hedges launched a solo homer in the third inning and Bobby Bradley did the same in the fourth for the Indians (74-77), who were eliminated from postseason contention with the loss.

Aaron Bummer (4-5) struck out one batter in one scoreless inning of relief to pick up the victory.

Aaron Civale (11-5), who tossed six shutout innings against the New York Yankees on Saturday, surrendered seven runs on as many hits — including four homers — in 1 2/3 frames on Thursday.

Anderson set the tone early by depositing a 1-1 cutter from Civale over the wall in right-center field.

Robert extended his hitting streak to 12 games after sending a first-pitch sinker from Civale over the wall in left field to open the second inning. Jimenez followed suit by crushing a 1-2 fastball to join Robert with nine homers on the season.

Chicago didn’t let up, however, as two quick singles set the stage for Anderson, who deposited a 0-1 fastball over the wall in right field. Anderson’s sixth career multi-homer performance upped his season HR total to 16, with three coming against Cleveland.

Robert capped the second-inning uprising with a long RBI single that caromed off the wall in center field.

Cleveland made a dent in the third inning as Hedges capped a nine-pitch at-bat against starter Reynaldo Lopez with his ninth homer of the season.

Bradley ended Lopez’s afternoon by sending a 3-1 fastball over the wall for his 15th homer in the fourth.