Kris Bryant and Patrick Wisdom homered and Javy Baez picked up an RBI on a bizarre play Thursday as the visiting Chicago Cubs bested the Pittsburgh Pirates 5-3 for a three-game sweep.

Ian Happ added an RBI single for the Cubs.

Chicago starter Kyle Hendricks (5-4) pitched seven innings, allowing three runs and six hits, with no walks and five strikeouts. Ryan Tepera got the final four outs for his first save.

Bryan Reynolds, Gregory Polanco and Michael Perez homered for the Pirates, who have lost six straight.

Bryant’s one-out homer to center, his 11th, gave the Cubs a 1-0 lead in the first inning.

In the third, Willson Contreras singled with one out and stole second. After Bryant struck out, Baez hit a grounder to third baseman Erik Gonzalez, whose throw to first pulled Will Craig off the base toward home. Baez stopped and started jogging back toward home. Although Craig — who has been subbing for injured Pirates first baseman Colin Moran — could have ended the inning by touching first, he instead gave chase to Baez.

Baez took off for first again, and Perez’s throw in that direction went into right, allowing Baez to go to second on what was officially a fielder’s choice, with the run counting for a 2-0 Chicago lead. Happ drove in Baez with a single, making it 3-0. 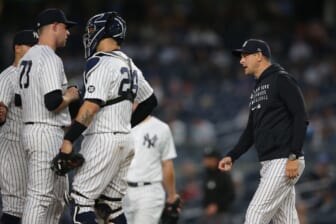 In the fourth, Wisdom was awarded first for being hit with a pitch, but the Pirates successfully challenged. Given a second chance, he hit his first homer to right-center field for a 4-0 Cubs edge.

Reynolds and Polanco hit back-to-back homers, the fifth for each, with one out in the bottom of the fourth to cut it to 4-2. Reynolds’ shot bounced into the Allegheny River.

Perez’s third homer, to right-center in the seventh, closed it to 4-3.

Chicago’s Eric Sogard singled and later scored on a double play in the ninth.