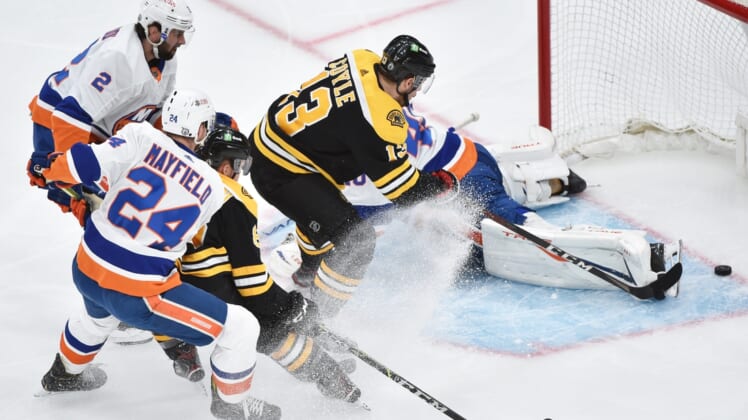 Casey Cizikas capitalized on a giveaway and scored on a breakaway 14:48 into overtime to lift the visiting New York Islanders over the Boston Bruins 4-3 in Game 2 of their East Division second-round series on Monday night.

Bruins defenseman Jeremy Lauzon attempted to toss the puck into the Islanders’ zone, but it bounced off teammate Charlie Coyle’s skate to set up Cizikas’ breakaway. Cizikas beat Boston goalie Tuukka Rask high stick side to seal the win.

Josh Bailey, Kyle Palmieri and Jean-Gabriel Pageau all scored in the Islanders’ three-goal second period. Semyon Varlamov started in place of Ilya Sorokin and made 39 saves for New York. The rookie Sorokin allowed four goals on 39 shots in the Islanders’ 5-2 loss in Game 1.

The best-of-seven series is tied 1-1 heading into Game 3 on Thursday night at New York.

Coyle, Patrice Bergeron and Brad Marchand each had a goal for the Bruins. Rask stopped 35 of 39 shots in his 100th career playoff game, extending his own franchise record.

Bailey’s pass through the slot deflected in off Lauzon’s skate for an Islanders’ power-play goal at 6:52 of the second to tie it 1-1. Palmieri scored just over four minutes later, poking in a loose puck after Nick Leddy’s shot off the boards bounced back to the crease.

Pageau netted another power-play goal on a point-blank wrister after Anthony Beauvillier’s backhand pass through the crease to make it 3-1 with 2:39 left in the second.

Bergeron’s one-timer from the high slot trimmed Boston’s deficit to 3-2 at 10:34 of the third. Marchand tied it 29 seconds into a power play on a wrister from the left circle with 4:54 remaining to force overtime.

Coyle skated into the slot, deked around Varlamov and tucked the puck in to put Boston up 1-0 just 2:38 into the game.