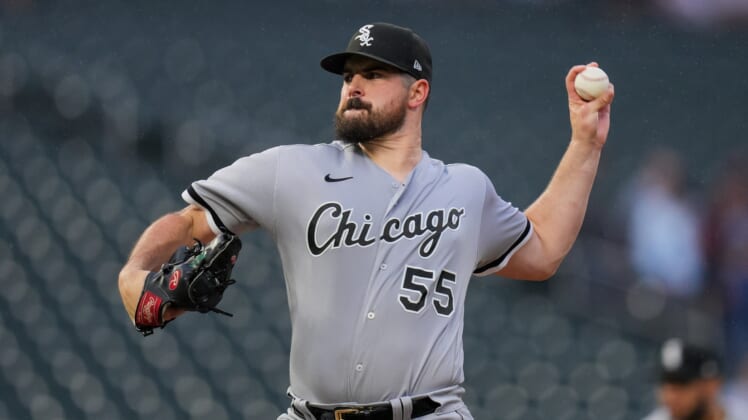 Carlos Rodon allowed one run over six innings to pick up his seventh victory of the season and Zack Collins went 2-for-3 with a double and two RBIs to lead the Chicago White Sox to a 4-1 victory over the Minnesota Twins in a game played in a steady rain on Tuesday night in Minneapolis.

Rodon (7-3) scattered seven hits and didn’t walk a batter while striking out eight en route to just his second win in his last 10 starts. Liam Hendriks, aided by a diving catch in the gap in left-center by Billy Hamilton, retired all six batters he faced for his American League-leading 22nd save.

Alex Kirilloff and Miguel Sano each had two hits for Minnesota, which had a three-game home winning streak snapped. Jose Berrios (7-3) suffered the loss despite allowing just two runs (one earned) on one hit over seven innings. Berrios, who retired 16 of the last 17 batters he faced, walked three and struck out 10.

Berrios’ one big blemish came when he walked Brian Goodwin and Leury Garcia back-to-back to start the second inning. Goodwin advanced to third when Twins catcher Ryan Jeffers threw the ball into center field on Ball 4 to Garcia. With two outs, Collins singled to center to drive in Goodwin and Garcia.

Minnesota cut it to 2-1 in the sixth when Luis Arraez led off with an infield single off Rodon’s glove and advanced to second one out later on Cruz’s high fly to shallow right-center, which landed among three Chicago defenders who lost it in the clouds.

Kirilloff then lined a single to drive in Arraez, but Rodon got out of the jam with back-to-back strikeouts of Jeffers and Max Kepler — the latter on a fastball clocked at 100.1 mph.

The White Sox extended the lead to 4-1 in the eighth off reliever Alex Colome. Collins led off with a double off the fence in right, went to third on a groundout by Danny Mendick and scored on a single by Adam Eaton.

The latter went to third when Yoan Moncada’s grounder skipped off the glove of Andrelton Simmons for an error, and Eaton scored on a sacrifice fly by Jose Abreu.