WATCH: Cardinals score in 9th to beat Dodgers on road 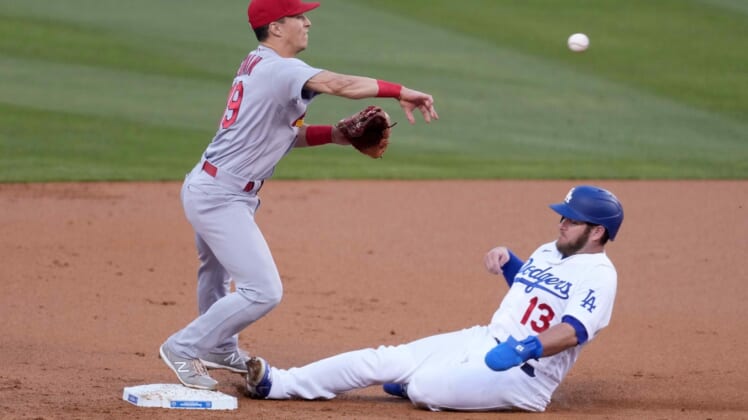 Edmundo Sosa grounded an RBI single to left field in the ninth inning and the St. Louis Cardinals earned a 3-2 victory Tuesday over the host Los Angeles Dodgers.

Right-hander John Gant went six scoreless innings and rookie Dylan Carlson contributed on offense and defense as the Cardinals improved to 5-4 on their current 10-game road trip. The final game of the trip and three-game series is Wednesday night.

Carlson drove in a run, had two hits and made a sliding catch in center field to end the sixth inning with a pair of Dodgers runners in scoring position. Tyler O’Neill made a running catch in the left-field corner off a line drive by Mookie Betts with two aboard to end the game.

Matt Beaty hit a two-run home run for the Dodgers, who lost for the fourth time in their last five games after winning nine of 10.

In their fifth bullpen game of the season, and the third consecutive one started by David Price, seven Dodgers relievers combined to give up the three runs. Blake Treinen (1-2) gave up Sosa’s hit in the ninth that followed a single and a steal of second by O’Neill.

After Price did not give up a run in his first two bullpen-game starts, he was unable to keep the momentum going Tuesday. Paul Goldschmidt’s ground-rule double in the first inning gave the Cardinals a 1-0 lead three batters into the game.

The Cardinals made it 2-0 in the second inning on Carlson’s RBI single to right field, knocking Price from the game.

Gant gave up four hits in his six scoreless innings and followed his pattern of being able to wiggle out of trouble. Gant gave up three walks, adding to his total of 34 that leads the National League. But he also lowered his ERA to 1.60, making it one of the best marks in baseball.

The Dodgers’ offense finally came alive in the seventh inning. Albert Pujols walked against his former team and was replaced by pinch runner Zach McKinstry. One batter later, Matt Beaty crushed an 0-1 pitch by Giovanni Gallegos to right field to tie the game 2-2. It was Beaty’s third home run of the season.

Cardinals right-hander Alex Reyes pitched the ninth inning for his 16th save in 16 chances. Gallegos (3-1) pitched two innings to earn the victory.