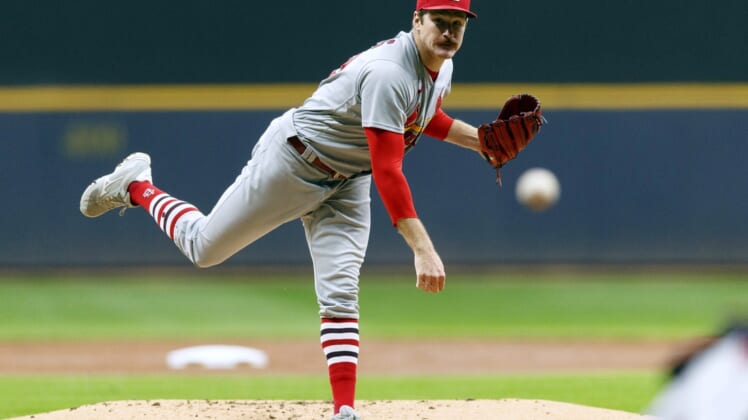 St. Louis (82-69) moved 4 1/2 games in front of Cincinnati (78-74) and Philadelphia (78-74) for the second NL wild card. The Reds had their scheduled Wednesday game against the Pittsburgh Pirates rained out while the Phillies beat the Baltimore Orioles 4-3.

The Cardinals moved within 8 1/2 games of NL Central-leading Milwaukee (91-61), which has lost four straight and six of its past eight.

The Cardinals jumped on Brett Anderson (4-9), activated off the injured list earlier in the day, for six runs — two earned — on six hits in 1 2/3 innings. Anderson, who hadn’t pitched since taking a line drive off his left (pitching) shoulder on Sept. 1, walked one and had no strikeouts.

Miles Mikolas (2-2), who was sidelined from late May to late August due to a right forearm injury, allowed two runs on four hits in seven innings in his seventh start back from the IL. He struck out three and walked none.

Cardinals third baseman Nolan Arenado, who drove in two to give him 103 RBIs on the season was removed in the fifth inning due to lower back tightness.

O’Neill staked the Cardinals to a 2-0 lead in the first inning with his 29th homer, following a one-out single by Goldschmidt.

The Cardinals added four unearned runs in the second, including two on one sacrifice fly. Center fielder Lorenzo Cain crashed into the wall hauling in Tommy Edman’s long drive, and he fell to the warning track. Cain flipped to right fielder Avisail Garcia, but not in time to prevent runners who were at second and third from scoring.

Goldschmidt, O’Neill and Arenado followed with three consecutive doubles to make it 6-0.

Arenado hit a sacrifice fly in the fourth and Bader an RBI double in the seventh. Goldschmidt socked his 27th homer in the eighth to put St. Louis up 10-2.

The Brewers’ runs came on an RBI single by Luis Urias in the fifth and Garcia’s 29th homer in the seventh.

Jace Peterson, who started at first base before moving to second, pitched a scoreless ninth for Milwaukee.

The longest winning streak in Cardinals history is 14 in 1935. The last time St. Louis won 11 consecutive games was in August 2001.