The Bucks lead the series 3-0 and will try for a sweep on Saturday in Miami.

Giannis Antetokounmpo tallied 17 points and 17 rebounds for the Bucks, and Jrue Holiday added 19 points and 12 assists.

The Bucks, the top offensive team in the NBA, have outscored Miami by 63 points in the past two games.

Milwaukee did get some bad news as starting guard Donte DiVincenzo left the game with a bruised foot with 10:05 left in the second quarter. He did not return.

In an effort to get off to a better start, Miami changed its starting lineup, inserting Goran Dragic in place of Kendrick Nunn. It didn’t work.

Dragic went 0-for-3 in the first quarter, and Milwaukee led 26-14. During that first quarter, Miami shot just 26.1 percent from the floor, and the Bucks outrebounded the Heat 22-10, including 6-1 on the offensive glass.

For the game, Dragic finished with eight points and three steals. 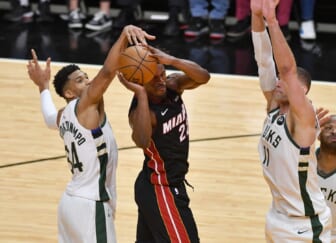 The Bucks led by as many as 19 points in the second quarter before settling for a 49-36 halftime advantage. Milwaukee built that lead despite shooting just 40.4 percent.

Defense was the key as the Bucks held Miami to 31.1 percent shooting while also claiming a 35-21 rebounding advantage.

The Bucks, led by Middleton’s 10 points, stretched their lead to 27 points in the third quarter before settling for an 86-60 lead.

Milwaukee cruised in the fourth quarter and finished the game with 55-42 rebounding edge. The Bucks shot 48.3 percent and held Miami to 37.6 percent.