Kolten Wong lined a two-run tiebreaking single during a four-run eighth inning as the Milwaukee Brewers rallied for an 8-5 victory over the visiting Chicago Cubs on Friday night in the opener of a three-game series.

Lorenzo Cain hit a tying single earlier in the inning as the Brewers defeated the Cubs for the 10th straight time. Luis Urias drove in three runs for Milwaukee (90-57) while Wong had three of the club’s nine hits.

Frank Schwindel homered for the Cubs, who have lost three straight games and six of their past seven. Schwindel, Rafael Ortega, Alfonso Rivas and Patrick Wisdom had two hits apiece for Chicago (66-82), which clinched its first losing season since 2014.

Milwaukee’s Aaron Ashby (3-0) struck out five and gave up three hits in three scoreless innings of relief. Fellow left-hander Josh Hader worked the ninth for his 32nd save in 33 opportunities.

Milwaukee trailed 5-4 entering the bottom of the eighth when Urias singled with one out against right-hander Rowan Wick (0-1). Daniel Vogelbach walked with two outs before Cain dropped a bloop single into right to score Urias.

Luke Maile walked on four pitches to load the bases before Wong drilled a full-count pitch into right center to give Milwaukee a 7-5 lead. Right-hander Dillon Maples replaced Wick and his first pitch was well behind left-handed-hitting Eduardo Escobar as Maile scored from third.

The Cubs scored four runs in the fourth with Rivas driving in the first with a run-scoring single to right. Matt Duffy followed with a grounder to third and the charging Escobar misplayed the ball for an error as Wisdom scored from third.

Sergio Alcantara delivered a run-scoring single to right to make it 3-0. Duffy then scored when Houser uncorked a wild pitch.

Milwaukee answered with three runs in the bottom of the inning on Christian Yelich’s run-scoring single to left and Urias’ two-run single to left center.

Schwindel led off the fifth with a homer to left, his 14th blast of the season. 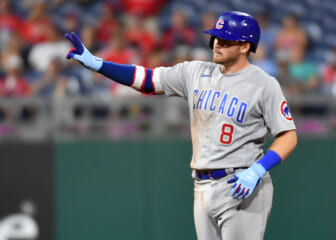 The Brewers got a run back in the fifth when Urias drew a bases-loaded walk off right-hander Codi Heuer. The run was charged to Davies.