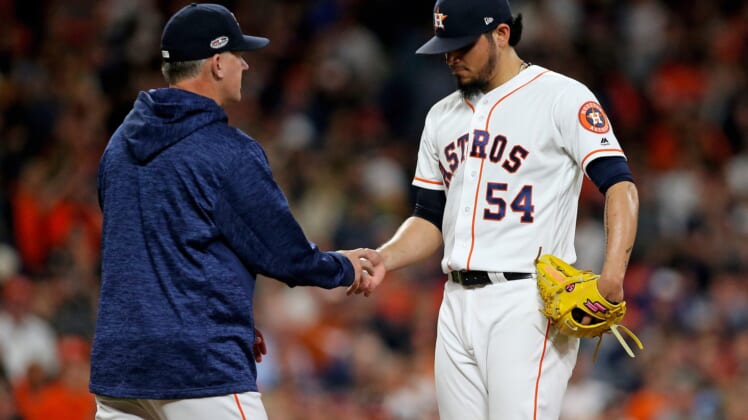 The Houston Astros have now been accused of stealing signs during their run to the World Series championship back in 2017.

A report released by the Athletic on Tuesday notes that MLB is investigating who within the organization knew about the sign stealing en route to Houston taking home the Fall Classic over the Los Angeles Dodgers.

We now have some video evidence, and it’s about as blatant as it gets. Check this out. Make sure your jaw recovers from dropping to the floor before finishing up the video.

This game in question came against then Chicago White Sox pitcher Danny Farquhar. It clearly shows that the Astros were up to no good.

Notice the banging sound when the pitcher went change-up? Notice the lack of banging when Farquhar threw a straight fast ball? That’s clear evidence that Houston was stealing signs from a video board in the outfield.

This is not the first time that these Astros have been accused of stealing signs. The New York Yankees accused them of the same thing during last season’s ALCS.

What does it all mean? MLB is investigating the matter, potentially even looking into the past couple seasons in addition to the 2017 campaign.

If it is indeed proven that the Astros stole signs, they will be punished at great length by the powers to be. That’s for sure.