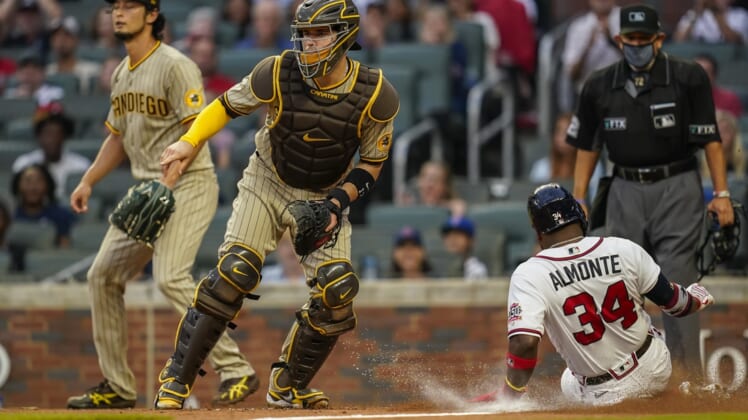 Atlanta’s Touki Toussaint looked sharp in his first start of the season, pitching the Braves to a 2-1 win over the visiting San Diego Padres on Tuesday.

Toussaint appeared to tire in the seventh and was lifted after allowing a pair of two-out singles. Tyler Matzek entered the game and retired pinch-hitter Jurickson Profar on a lazy fly ball to center to end the threat.

Toussaint has been on the injured list since March 22 with a right shoulder strain. Toussaint was 2-1 with a 4.24 ERA in six minor league rehab starts and had allowed only two runs over his previous 12 innings with 18 strikeouts.

The much-maligned Atlanta bullpen was able to hold the lead. Matzek (one-third inning) and Chris Martin (one inning) had scoreless outings. Closer Will Smith worked around a two-out double by Wil Myers to earn his 19th save.

San Diego starter Yu Darvish (7-4), making his first start since July 8 because of back soreness, pitched 5 2/3 innings and allowed two runs on four hits, two walks and three strikeouts. Darvish dropped to 0-4 in his career against Atlanta.

Freddie Freeman put the Braves ahead to stay with an opposite-field home run in the sixth off Darvish. It was Freeman’s 22nd home run and his fifth over the last seven games. Freeman went 2-for-4 and raised his average to .284.

The Padres threatened in the eighth inning against reliever Martin. Fernando Tatis Jr. singled and advanced to second base on a grounder, but was stranded when Manny Machado flew out to deep center field.

The Braves got a run in the second inning on Guillermo Heredia’s RBI single, but the Padres tied the game at 1-1 on Tommy Pham’s sacrifice fly in the fourth inning.

The teams will complete the three-game series with a doubleheader on Wednesday.