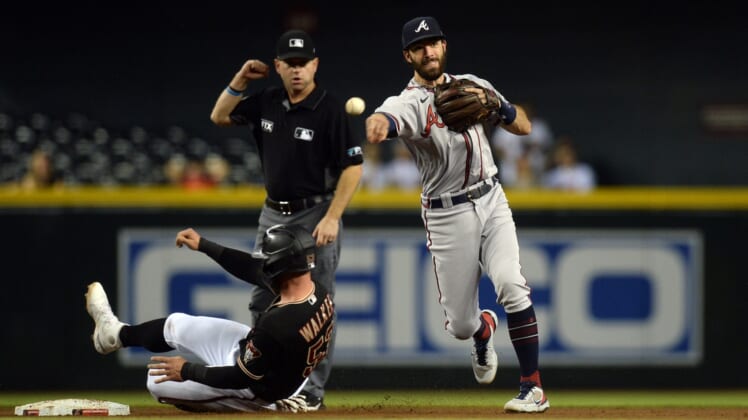 Austin Riley, Ozzie Albies and Freddie Freeman each homered and Adam Duvall lost a long ball due to a bizarre situation as the Atlanta Braves rolled to a 9-2 victory over the Arizona Diamondbacks on Wednesday night in Phoenix.

Right-hander Ian Anderson (8-5) struck out eight in seven strong innings as the Braves (80-70) won their fourth straight game to maintain their three-game lead over the Philadelphia Phillies in the National League East.

Christian Walker homered for Arizona (48-104), which has dropped four consecutive games and eight of its last nine.

Duvall came to the plate with Riley on first and Freeman on third with one out in the first inning and the Braves holding a 1-0 lead.

He ripped the first pitch from Merrill Kelly (7-11) to deep left center and Arizona center fielder Jake McCarthy jumped above the wall and the ball bounced off his glove and into the seats.

But it wasn’t initially clear whether or not McCarthy caught the ball. Duvall stopped between first and second asking for a ruling. Meanwhile, the unsure Riley started back toward first and went past Duvall before turning around and starting back toward second.

The umpiring crew ruled Duvall out for passing Riley. So instead of his 38th homer, Duvall was credited with a two-run single that extended his NL RBI lead to 109.

Anderson gave up one run, two hits and one walk and retired the final 17 batters he faced.

Albies drove in Atlanta’s first run with a sacrifice fly and later smacked a two-run homer to right in the fifth to make it 6-1. The blast was his 30th of the season and gave him 100 RBIs, marking the first time he’s reached either figure.

Riley hit his 31st homer of the season in the third. Freeman, who had three hits, also hit No. 31, a two-run shot in Atlanta’s three-run ninth.

Arizona’s first run scored on Kole Calhoun’s opposite-field double inside the left-field line in the first inning to drive in Ketel Marte, who had walked.

Walker’s leadoff single in the second was the Diamondbacks’ only other hit against Anderson. The next batter, Josh VanMeter, hit into a double play to start Anderson’s stretch of retiring 17 straight hitters.

Walker led off the eighth with his ninth homer of the season, a shot to left center off right-hander Chris Martin.