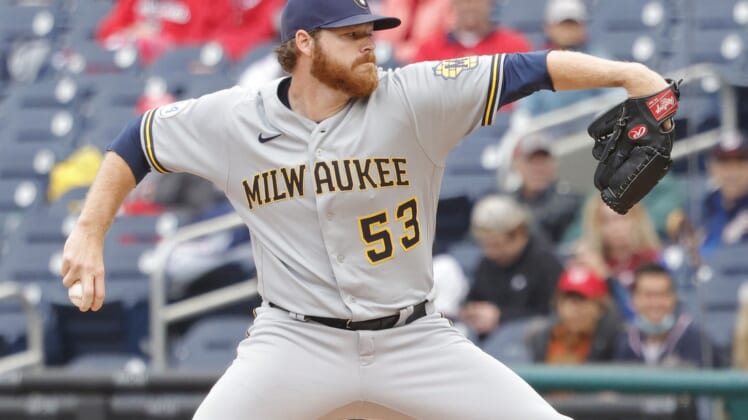 Avisail Garcia and Omar Narvaez each homered and Brandon Woodruff tossed seven dominant innings as the visiting Milwaukee Brewers completed a three-game sweep of the Washington Nationals with a 3-0 win on Sunday.

Garcia gave the Brewers all the run support Woodruff (4-2) would need in the first inning with his two-out, two-run homer off Max Scherzer (4-4). Both pitchers struck out 10.

Brad Boxberger pitched a scoreless eighth inning and Josh Hader worked around a leadoff single in the ninth for his 12th save in as many opportunities.

Milwaukee has won four in a row and seven of its last nine.

Garcia deposited Scherzer’s 1-2 fastball over the center field fence in the first after Daniel Vogelbach walked with one out. Garcia now has 10 home runs and 30 RBIs in 48 games this season, compared to two home runs and 15 RBIs over 53 games in 2020.

Scherzer retired 16 of the next 17 batters he faced after Garcia’s blast and recorded 10 strikeouts with two hits allowed over six innings.

Washington was held to three hits and lost its fourth straight.

The Brewers added an insurance run in the ninth on Narvaez’s solo homer off Austin Voth.

Coming into the game, the Nationals has scored a total of three runs during their previous three games, leading manager Dave Martinez to shake up his lineup for the series finale.

Nationals right fielder Juan Soto batted leadoff for the second time in his career and went 0-for-3 with a walk.

Woodruff did not allow a hit until Kyle Schwarber singled to begin the fifth inning. He is the eighth pitcher in Brewers history to record 10 consecutive quality starts and the first since CC Sabathia had 13 in 2008.