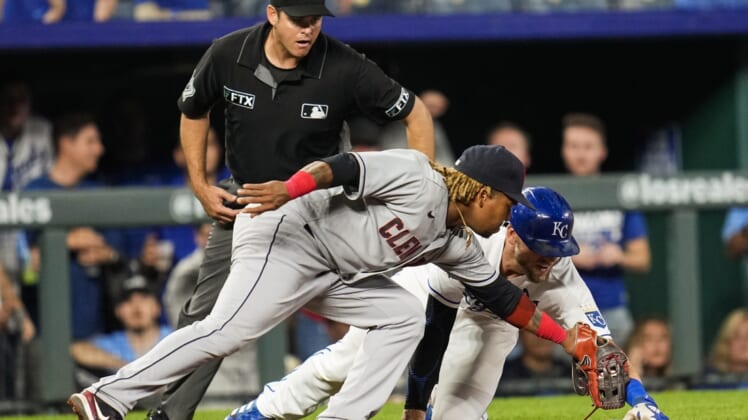 Bradley Zimmer recorded a double, two sacrifice flies and three RBIs as the visiting Cleveland Indians salvaged the final game of a three-game series with a 6-1 victory over the Kansas City Royals on Thursday.

The Indians spoiled the major league debut of Royals starter Angel Zerpa (0-1), but he hardly could have been any better. He allowed two unearned runs on three hits in five innings. He walked one and struck out four.

Indians starter Shane Bieber, who was making his second start since spending more than three months on the injured list, lasted three innings. He allowed one run on four hits, with one strikeout.

The Royals got on the board in the second inning. Andrew Benintendi led off with a double and scored on a single by Carlos Santana.

The Indians responded with a pair of unearned runs in the third. Roberto Perez hit a ground ball to third baseman Adalberto Mondesi, whose throw was in the dirt. Perez scored on a double by Oscar Mercado, who then scored on Zimmer’s sacrifice fly.

The Indians added to the lead in the sixth off reliever Dylan Coleman, who allowed his first earned run in his fourth major league appearance. Jose Ramirez tripled leading off the inning and scored on Harold Ramirez’s line drive through the right side.

The Royals missed a great scoring chance in the sixth. Perez led off with a double and was followed by a single by Benintendi. But Perez was retired at the plate on a fielder’s choice. The Royals then loaded the bases with one out, but Mondesi hit into a double play to end the threat.

The Indians added two more in the seventh. Myles Straw hit a one-out single, Zimmer knocked him in with a double, and Zimmer scored on a single by Harold Ramirez.

Zimmer’s sacrifice fly in the ninth plated the final run.