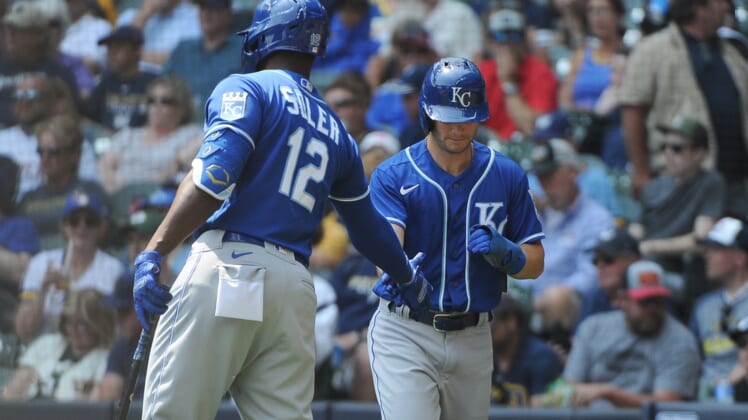 Brad Keller pitched effectively into the seventh inning for his first victory since early June and the Kansas Royals capitalized on two Milwaukee errors en route to a 6-3 victory over the host Brewers on Wednesday afternoon.

Milwaukee’s fielding miscues led to two unearned runs in the fourth and three more in the sixth.

Kansas City erased a 3-2 deficit in the sixth against reliever Brent Suter (9-5). Carlos Santana singled and took second with one out when Andrew Benintendi reached on an error by first baseman Jace Peterson. Hunter Dozier tied it 3-3 with an RBI single to center. Ryan McBroom’s pinch-hit infield single loaded the bases and Nicky Lopez followed with a two-run double into the right-field corner.

Jorge Soler opened the eighth with a 438-foot solo homer, his ninth, to make it 6-3.

Kansas City, which is 21 games under .500 against American League opponents, improved to 8-3 in interleague play, including 4-0 against National League Central-leading Milwaukee.

Milwaukee scored three runs in the fifth to go up 3-2 with the aid of a fielding gaffe by third baseman Dozier.

Luis Urias walked to open the inning and Jackie Bradley Jr. singled him to third. Rowdy Tellez’s pinch-hit sacrifice fly scored Urias to make it 2-1. Kolten Wong then bunted along the third-base line. Dozier waited for the ball to roll foul, but touched it while it was still in fair territory, allowing Wong to reach.

Urias made a diving stop on Whit Merrifield’s grounder to third, but his quick recovery throw was wild for a two-base error. Lauer stuck out the next two hitters, but Benintendi sliced an RBI double down the left-field line. Dozier followed with an RBI single.