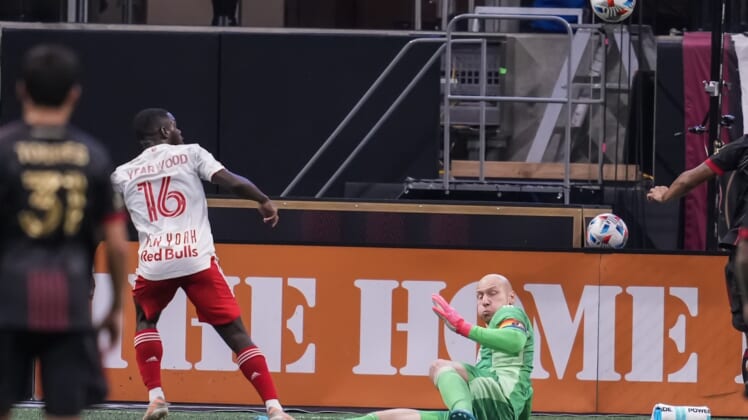 Brad Guzan finished with four saves as the host Atlanta United FC played to a scoreless draw against the New York Red Bulls on Sunday.

Guzan made his biggest save of the match in the 69th minute, denying Kyle Duncan’s left-footed blast. The 36-year-old Guzan kept the Red Bulls at bay en route to recording his third clean sheet of the season and 63rd career.

New York goalkeeper Carlos Coronel was not to be outdone. The Brazilian extended his body to deny Brooks Lennon’s shot from close range in the 78th minute.

Coronel made three saves for the Red Bulls (4-5-1, 13 points), who fell to 0-4-1 away from home this season. Coronel notched his fourth clean sheet of the season and fifth career to help New York continue its dominance over Atlanta. The Red Bulls are 6-0-3 in nine regular-season encounters against Atlanta.

Atlanta pressed for the go-ahead goal in the late going, but Ezequiel Barco’s free kick in the 87th minute sailed over the crossbar. Miles Robinson’s header hit the post two minutes later for Atlanta (2-2-6, 12 points), which improved to 2-0-3 at home this season.

Atlanta’s Franco Ibarra sustained a right hamstring injury following a collision with New York’s John Tolkin in the first half. Ibarra immediately was replaced by Alan Franco in the 37th minute.

Franco, however, committed an egregious gaffe two minutes later allowing a point-blank opportunity for New York’s Wiki Carmona, who was making his first career MLS start. The 18-year-old Carmona fed Patryk Klimala, whose right-footed shot initially handcuffed Guzan before the keeper was able to make a diving effort to prevent the ball from rolling over the goal line.

Atlanta registered its first shot on goal in the 46th minute, courtesy of an 18-yard left-footed drive from Erick Torres.

New York’s Andres Reyes sustained an apparent right hamstring injury early in the second half. He was replaced by Frankie Amaya.