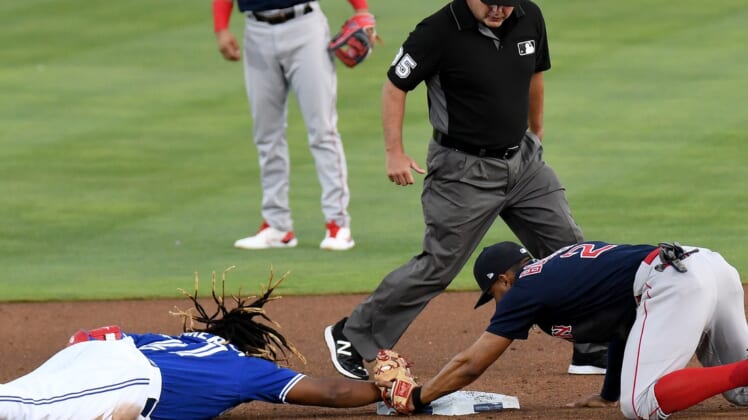 Alex Verdugo and J.D. Martinez homered in a five-run first inning and the visiting Boston Red Sox went on to defeat the Toronto Blue Jays 7-3 Wednesday night at Dunedin, Fla.

Kike Hernandez had three hits, including a home run and a double, for the Red Sox who have split the first two games of the three-game series.

Boston right-hander Garrett Richards (4-2) allowed two runs, seven hits and four walks while striking out five in 6 2/3 innings. He has won four straight decisions over his past five starts.

Marcus Semien had a two-run homer for the Blue Jays, who had a three-game winning streak end.

Xander Bogaerts singled, took third on a double by Rafael Devers and scored on a groundout by Vazquez. Bobby Dalbec hit an RBI double to complete the scoring in the top of the first.

Semien led off the bottom of the first with a walk, but was out trying to return to third base after he had decided against trying to score on Bo Bichette’s double. Vladimir Guerrero Jr. then hit an RBI double.

Stripling retired eight batters in a row before Hernandez doubled with two out in the fourth and he was replaced by Trent Thornton.

Richards was replaced by Garrett Whitlock after Reese McGuire singled with two out in the seventh. Semien hit his 10th home run of the season, cutting the lead to 6-3.

Vazquez hit his third homer of the season with one out in the eighth against Jeremy Beasley.

Adam Ottavino pitched around an infield single in the bottom of the eighth.

Josh Taylor overcame a one-out walk in the bottom of the ninth.