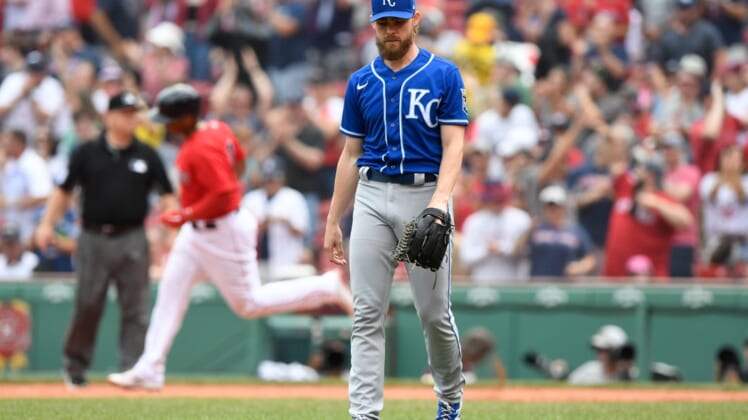 Devers (3-for-5) and Santana (3-for-5) each clubbed three-run home runs and drove in a season-high five runs apiece. J.D. Martinez and Enrique Hernandez both had solo shots, and Michael Chavis and Marwin Gonzalez each added an RBI as the Red Sox set a season-high for runs in their 17-hit attack.

Eovaldi (9-4) struck out six batters while allowing five hits and walking none.

Boston won its seventh straight game to complete a perfect homestand that began with a three-game sweep of the rival New York Yankees on June 25-27.

Jarrod Dyson (1-for-4) had the lone RBI for Kansas City. Royals starter Kris Bubic (2-4) was roughed up for five runs on four hits with three walks and three strikeouts over four innings.

Kansas City suffered its ninth straight defeat and has lost 21 of 25 overall.

Hernandez led off the home first with a homer for the third time in five games to put Boston ahead 1-0. Martinez launched his 17th home run of the season to lead off the fourth before Santana’s three-run blast made it 5-0.

Chavis added a sacrifice fly in the seventh. Gonzalez hit an RBI single in the eighth before Santana capped the offensive barrage with an RBI double.

Kansas City avoided the shutout with Dyson’s two-out double in the ninth.