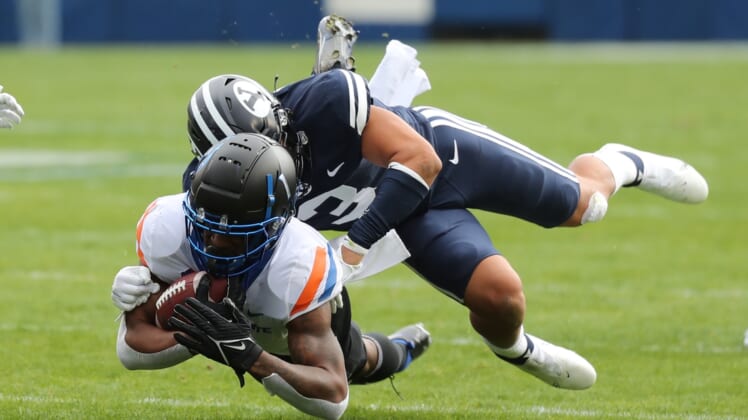 Hank Bachmeier passed for 172 yards and Boise State forced four turnovers to upset No. 10 BYU 26-17 in a nonconference matchup on Saturday in Provo, Utah.

Cyrus Habibi-Likio rushed for a season-high 75 yards and Andrew Van Buren added a season-high 60 rushing yards for the Broncos (3-3). Each player added a touchdown as Boise State snapped a two-game losing streak in the series with BYU.

Jaren Hall threw for a career-high 302 yards with one touchdown and one interception for BYU. Tyler Allgeier added 73 rushing yards and a touchdown.

The Cougars (5-1) outgained Boise State 413 to 312 in total yards, but finished minus-4 in the turnover margin.

Hall returned to action for BYU after sitting out a pair of games with a rib injury. He looked sharp in the opening quarter, tallying 100 yards and a touchdown in that 15-minute stretch.

The Cougars opened up a 10-0 lead after scoring on each of their first two drives. Hall capped the second scoring drive with a 14-yard strike to Samson Nacua with 6:55 remaining in the opening quarter.

Boise State rallied to take a 20-10 halftime lead. The Broncos capitalized on a pair of fumbles deep inside BYU territory and became the first opponent to lead BYU at any point this season.

Scott Matlock recovered a fumble by Allgeier at the BYU 24-yard line to set up an 11-yard sprint by Habibi-Likio for Boise State’s first touchdown and a tie at 10. Then, the Broncos recovered a second fumble by Lopini Katoa at the BYU 23 on a kickoff return. That takeaway set up a 1-yard scoring plunge by Van Buren with 34 seconds left in the half.

Boise State led 20-10 at the break as Jonah Dalmas booted a 20-yard field as time expired.

A 59-yard catch by Gunner Romney set up a 1-yard plunge from Allgeier that cut the Broncos’ lead to 23-17 midway through the fourth quarter.

Kaonohi Kaniho picked off a pass from Hall at the Broncos’ 11-yard line with 1:59 left to seal the win.