Blake Snell pitched six-plus strong innings and No. 8 hitter Jurickson Profar drove in two runs on a groundout and a blooper, leading the San Diego Padres to a 3-2 win over the host Miami Marlins on Thursday night.

Mark Melancon pitched a perfect ninth inning to earn his major-league-leading 29th save.

Padres shortstop Fernando Tatis Jr., who leads the National League with 29 homers, went 0-for-4 with three strikeouts. However, he also walked, stole his NL-leading 23rd base and scored a run.

Marlins third baseman Jon Berti left the game in the seventh inning after being hit in the back of the helmet by Padres reliever Austin Adams’ 85 mph slider. It was Adams’ 15th hit by pitch this season, the most in the majors.

Snell (4-3) struck out eight and allowed three hits, three walks and one run.

Padres reliever Emilio Pagan recorded perhaps the biggest out of the game, entering the game and retiring Jesus Aguilar on a bases-loaded fly ball to end the seventh inning. 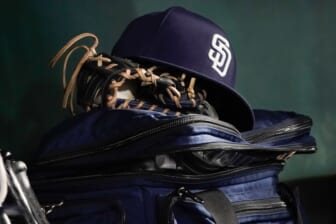 Rookie Jordan Holloway (2-3) took the loss on a bullpen day for the Marlins. He allowed three hits, five walks and three runs (two earned) while striking out one in 3 2/3 innings.

The Padres opened the scoring in the second inning on Profar’s RBI groundout. He used his speed to beat out what could have been inning-ending double play.

Tatis made his contribution in the fifth, drawing a walk, stealing second and eventually scoring on a sacrifice fly by Miami-area native Manny Machado.

The Marlins scored twice in the seventh to cut the deficit to 3-2. Isan Diaz started the rally a pinch-hit double, ending Snell’s night. Later in the inning, Joe Panik stroked an RBI single off Adams, and Starling Marte drew a bases-loaded walk.