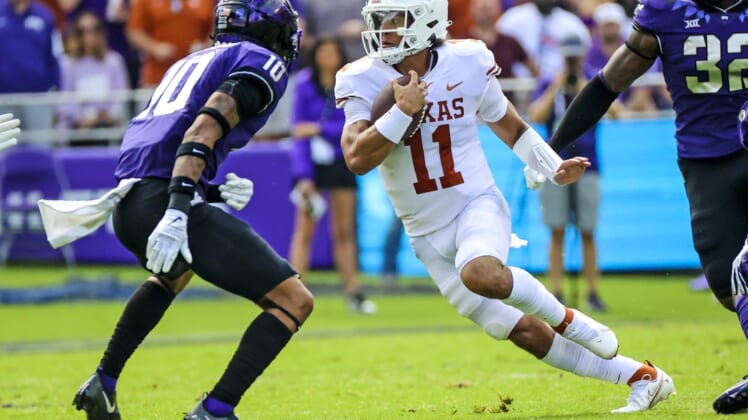 Bijan Robinson rushed for a career-high 207 yards and two scores and Cameron Dicker booted four field goals as visiting Texas did just enough to beat TCU 32-27 on Saturday afternoon in Big 12 play in Fort Worth, Texas.

Robinson scored on runs of 27 and 4 yards, had a career-high 34 carries and eclipsed the 100-yard mark for the sixth time in his past seven games, dating back to the final two contests of the 2020 campaign.

The Horned Frogs (2-2, 0-1 in Big 12) couldn’t get out their own way for much of the game, fumbling three times, muffing a punt and making mistakes that extended Texas drives.

Dicker had two 38-yard field goals in the first quarter, a 26-yarder in the second and one from 28 yards in the third. Three of those kicks came after TCU turnovers or mistakes.

Zach Evans ran for 113 yards and a TD to lead the TCU ground attack. Max Duggan passed for 182 yards and a touchdown, and Griffin Kell added two field goals for the Horned Frogs, from 25 and 36 yards in the second and third quarters, respectively.

Texas quarterback Casey Thompson endured an uneven performance, finding Jordan Whittington for a 32-yard fourth-quarter touchdown that put Texas ahead at 32-20 to offset an early interception and two TCU sacks.

But TCU fought back, clawing to with 32-27 on Kendre Miller’s 2-yard TD run with 4:23 to play. Texas then ran out the clock, with Robinson carrying six times on the final possession. 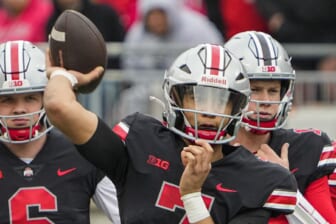 Robinson scored on a twisting 27-yard scoring run up the middle of the field, capping a 99-yard drive that featured a 41-yard run by Thompson and a fourth-down conversion and was sustained by a targeting penalty on the Horned Frogs’ TJ Carter deep in Texas territory.

Duggan’s TD pass came from 11 yards to Spielman in the waning seconds of the first quarter, culminating a six-play, 75-yard drive.

TCU had defeated Texas in seven of the past nine seasons and three times in a row in Fort Worth.