WATCH: Big plays get No. 6 Penn State past Villanova 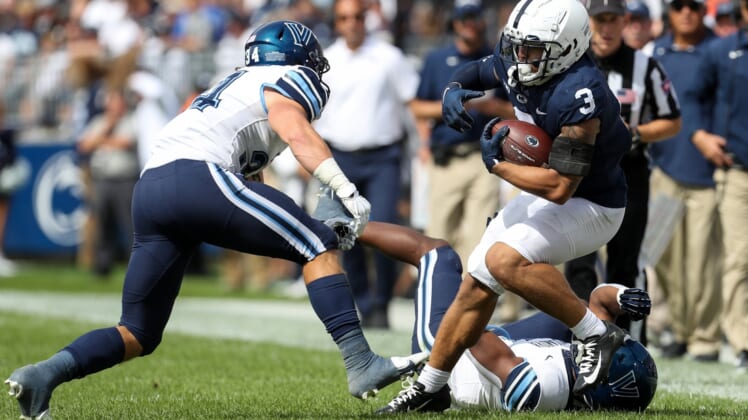 In their first meeting with the FCS Wildcats since 1951 – a Villanova victory – the Nittany Lions (4-0) saw Clifford connect on 19-of-26 passes for a career-high 401 yards with one interception.

Washington caught five passes for a game-high 148 yards, and Jahan Dotson caught seven passes for 117 yards and scored in his sixth consecutive game.

KeAndre Lambert-Smith had a long TD reception, Tyler Warren rushed for a score and Ji’Ayir Brown had an interception.

Penn State, which piled up 509 yards of offense, improved to 6-3-1 in the all-time series and was victorious for the 19th consecutive time against schools from Pennsylvania.

Ranked No. 11 in the STATS Perform FCS Poll, Villanova (3-1) got two TD passes from Daniel Smith, who was 20 of 34 for 222 yards with an interception. Villanova’s Rayjoun Pringle had four catches for 107 yards and two TDs, while Cole Bunce kicked a 39-yard field goal and Kshawn Schulters had an interception.

After stopping Villanova on the game’s first series, the Penn State took all of one play to go up 7-0 as Dotson got one-on-one coverage and zipped behind the Wildcats’ secondary for a 52-yard score.

Bunce’s 39-yard boot got Villanova on the board on its third drive after a roughing-the-passer penalty wiped out an interception by Brown.

Penn State made it 14-3 when Clifford connected with Washington for a 52-yards score just 53 seconds into the second quarter.

Jordan Stout booted a 29-yard field for a 17-3 halftime lead, but the Nittany Lions could not get their running game going with just 18 yards on 17 attempts in the first half.

Clifford rolled out and kept a play alive early in third quarter, finding Lambert-Smith down the sideline for an 83-yard score, and later hit Washington again from 23 yards for a 31-3 lead.

Warren scored on a fourth-down plunge in the fourth quarter for Penn State, and Pringle caught two TD passes for Villanova in the final 9:42 to complete the scoring.