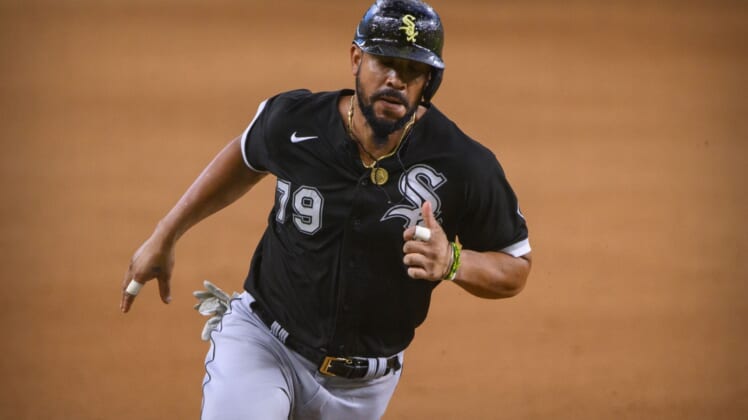 Yasmani Grandal homered for the second straight game and Cesar Hernandez, Jose Abreu and Leury Garcia drove in two runs each to back 5 1/3 strong innings from Lucas Giolito and lift the Chicago White Sox to a 7-2 win against the Texas Rangers on Sunday afternoon in Arlington, Texas.

A five-run, fourth inning outburst against Rangers starter Jordan Lyles put the White Sox in control. Grandal opened the rally with a solo home run to right center, his 22nd long ball of the season and eighth since returning Aug. 27 from a lengthy stint on the injured list.

Hernandez and Abreu followed with two-run singles, chasing Lyles from the game and sullying what had been a splendid September to date for the veteran right-hander.

Lyles (9-12) gave up five runs and eight hits in 3 2/3 innings with three walks and three strikeouts. He entered the game with victories in each of his first two starts this month, yielding one earned run in 14 innings for a 0.64 ERA.

The Rangers (55-94) got a run back on Isiah Kiner-Falefa’s RBI single in the fifth against Giolito (10-9), who earned the victory by allowing one run on six hits with one walk and four strikeouts.

Garcia hit a two-run double in the seventh to extend the lead to 7-1.

The Rangers’ Adolis Garcia had a sacrifice fly in the eighth to cap the scoring.

Chicago’s Yoan Moncada walked to extend his on-base streak to 28 games. Garcia, Tim Anderson and Abreu each had two hits.

Kiner-Falefa and Willie Calhoun had two hits apiece for Texas, which has lost four of five.

Manager Tony La Russa returned to the White Sox dugout after serving a one-game suspension Saturday, the result of an incident Thursday in which reliever Mike Wright intentionally hit the Los Angeles Angels’ Shohei Ohtani with a pitch.