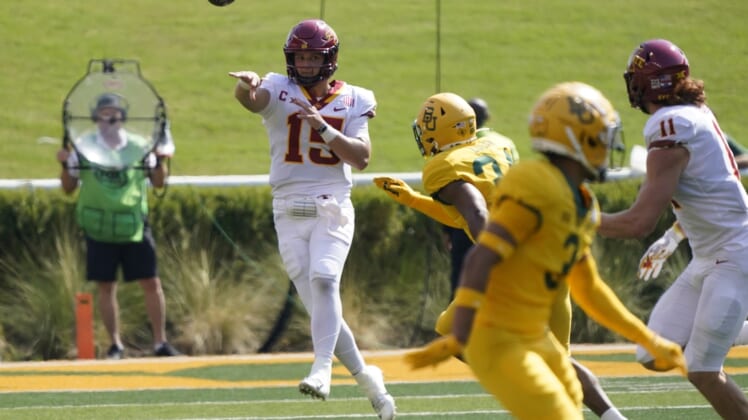 Gerry Bohanon passed for 164 yards and two touchdowns and ran for a third score, and Trestan Ebner scored on a 98-yard kickoff return as Baylor did just enough to beat visiting 14th-ranked Iowa State 31-29 on Saturday afternoon in Waco, Texas in both teams’ Big 12 Conference opener.

Bohanon ran for an 8-yard TD and his scoring tosses were a 21-yarder to Tyquan Thornton and a 33-yard strike to tight end Ben Sims, both in the second quarter. Bohanon ended up hitting on 14 of his 19 throws for the surprising Bears (4-0, 1-0 Big 12).

Hall also caught five passed for 51 yards, including a 16-yard touchdown pass from Brock Purdy with 24 seconds to play to set up a potential tying 2-point pass play. The conversion broke down from the start, with Purdy dropping the snap, and his pass was intercepted in the end zone by Baylor’s JT Woods.

Iowa State came into the game with the No. 1 defense in FBS, allowing just 194 yards per game through its first three outings but surrendered 284 yards on Saturday, including 212 yards in the first half alone.

Ebner raced to a 98-yard kickoff return TD after a Mevis FG in the third quarter to put the Bears in front at 28-16.

Isaiah Hankins’ 34-yard field goal midway through the fourth quarter ended up producing the winning points for the Bears.