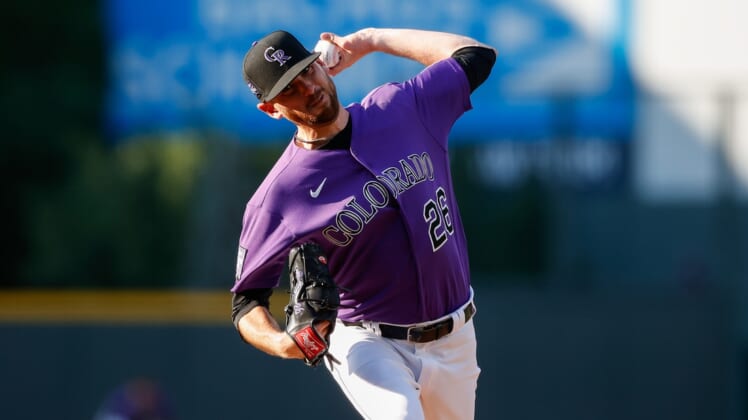 Gomber (6-5) held San Diego to just three hits and had a single in matching his longest outing of the season. He struck out four and didn’t walk a batter.

Daniel Bard pitched a shaky ninth for his ninth save.

Trent Grisham homered and Tommy Pham had two hits for the Padres, who have lost seven of their last nine.

Gomber retired the first nine batters before Pham led off the fourth by barely legging out an infield single. Gomber quickly erased him by getting Grisham to hit a comebacker for a double play.

The Rockies made Dinelson Lamet work a little harder than Gomber. They had at least one baserunner on in each of his four innings. Charlie Blackmon had a two-out single in the first to extend his hitting streak to 13 games, the longest current streak in the majors.

Colorado used a two-out rally in the third to take the lead. Yonathan Daza started it with a single, Blackmon drew a walk and Trevor Story followed with a single up the middle to drive in Daza from second to make it 1-0.

Lamet gave up a leadoff single to Joshua Fuentes in the fourth but got out of it with an inning-ending double play. Lamet (1-2) allowed one run on four hits and struck out three in four innings.

The Padres had a chance in the sixth when Victor Caratini led off with a double off the top of the fence in left-center. Reliever Ryan Weathers failed to advance him on a bunt. Caratini moved to third on Pham’s groundout but was stranded there.

Cron gave Colorado some breathing room with a leadoff homer in the seventh, his sixth of the season, and Ryan McMahon had an RBI double in the eighth.

With one out in the ninth Pham doubled and Grisham homered, his seventh.