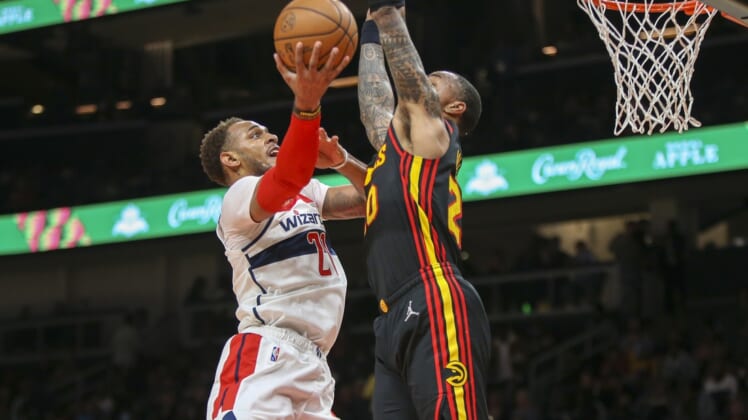 Trae Young led seven Atlanta players in double figures with 26 points to help the Hawks to a 118-111 win over visiting Washington on Monday and snap the Wizards’ three-game winning streak.

Young, who was 7-for-16 from the field and 11-for-11 from the line, added six assists. Bogdan Bogdanovic had a season-high 16 points and made four 3-pointers, and Clint Capela also scored 16 points and chipped in with 13 rebounds.

The win avenged Atlanta’s 122-111 loss in Washington on Thursday and evened the season series at a game apiece. The teams don’t play again until March 4 in Washington. Atlanta improved to 3-0 at home.

Washington’s Bradley Beal scored 24 points, but made only 3 of 11 from long range. Kyle Kuzma scored 18 points, and Spencer Dinwiddie added 14 points and 10 assists.

Daniel Gafford returned to the Washington lineup after missing two games with a bruised right quad. However, he was limited to 15 minutes because of early foul trouble and finished with four points. Davis Bertans left the game in the second quarter with a left ankle sprain and did not return.

The Hawks led by as many as 13 points in the first half when Gorgui Dieng made a pair of free throws to make it 36-23 with 11:40 left in the second quarter. Atlanta led 63-60 at intermission behind 14 from Young. Beal had 19 in the half.

Atlanta stretched its lead to 17 points when Young converted a three-point play to make it 80-63 with 5:25 remaining in the third quarter, but the Wizards’ second unit outplayed Atlanta’s second group in the final two minutes, and Washington was able to cut the margin to 84-77 going into the fourth quarter.

Washington opens a three-game homestand on Wednesday against Toronto. Atlanta is on the road Wednesday to play Brooklyn.