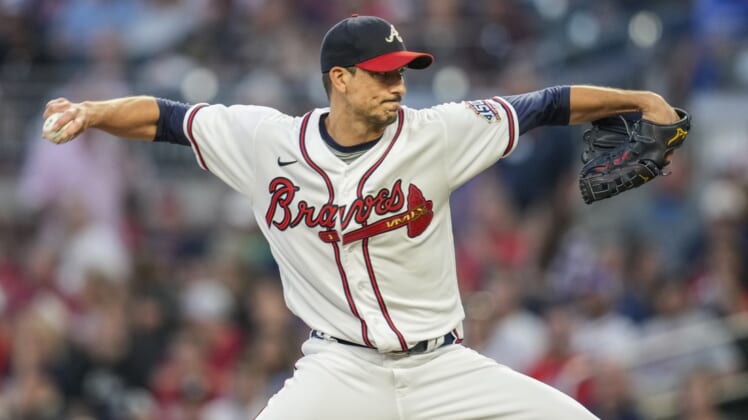 Charlie Morton showed why the Atlanta Braves pursued him so actively during the offseason.

The veteran right-hander, who is accustomed to working in high-pressure games from his time with Houston and Tampa Bay, threw seven shutout innings on Tuesday and the Braves defeated the visiting Philadelphia Phillies 2-1 to reduce their magic number for clinching the National League East to three.

Atlanta (84-72) stretched its lead over Philadelphia (81-76) to 3 1/2 games. The Braves could win their fourth straight division championship by sweeping the three-game series that began Tuesday.

Morton (14-6) allowed three hits, all singles and two walks while striking out 10. It was the 19th double-digit strikeout game of his career. His 213 strikeouts this year are the most by an Atlanta pitcher in a season since Javier Vazquez fanned 238 in 2009.

Morton emerged victorious in a pitching duel with Philadelphia’s Zack Wheeler (14-10), who gave up two runs in seven innings. Wheeler allowed just four hits, but three of them came in the third inning when the Braves scored both of their runs. He struck out seven, walked one and set the Braves down in order five times.

After Atlanta’s Luke Jackson pitched a perfect eighth inning, there was drama in the ninth.

Harper scored on a one-out sacrifice fly from Didi Gregorius, but Freddy Galvis stuck out to end the game, sealing Smith’s 36th save.

The Braves’ third-inning rally began when Travis d’Arnaud hit a leadoff double to left. He went to third on Dansby Swanson’s single. Morton bunted Swanson into scoring position, and Jorge Soler drove in both runners with a line-drive single to left.

Atlanta had runners at second and third in the eighth inning, but Hector Neris struck out Austin Riley to end the threat.