Ronald Acuna Jr. and Ehire Adrianza hit grand slams and Austin Riley went deep twice as the Atlanta Braves powered to a 20-1 win over the visiting Pittsburgh Pirates on Friday.

Acuna went to the opposite field on a full-count pitch from Tyler Anderson in the second inning and sliced the ball toward right field, where it landed in the third row. It was Acuna’s National League-leading 14th home run. He later added a sacrifice fly, with his five RBIs tying a career high.

Riley was 3-for-4 with a double, two homers and a sacrifice fly. He hit solo homers in the fifth and seventh innings, giving him seven long balls this season. It was the first multi-homer game of his career.

Ian Anderson scattered six hits, didn’t walk a batter and struck out six. Over his past six starts, he has posted a 2.02 ERA. The Braves are 5-0 in his home starts this year.

Tyler Anderson (3-4) worked five innings and allowed a career-high-tying nine runs on 10 hits and two walks. He struck out seven. 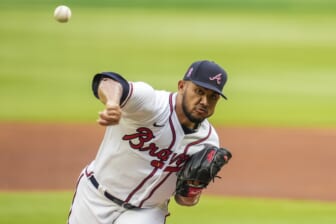 Atlanta got the Braves on the board in the first inning when Albies doubled to center field, scoring Acuna.

The Braves loaded the bases in the second on a double by Swanson, a walk to Kevan Smith and an infield single by Guillermo Heredia. After Anderson struck out, Acuna delivered the game-changing blow.

Atlanta took a 6-0 lead in the fourth on Acuna’s sacrifice fly.

The Braves put the game away in the fifth with back-to-back home runs by Albies and Riley.

Ozuna ended a 0-for-11 streak with a solo homer in the sixth. Atlanta went back-to-back again in the seventh on solo shots from Riley and Swanson.