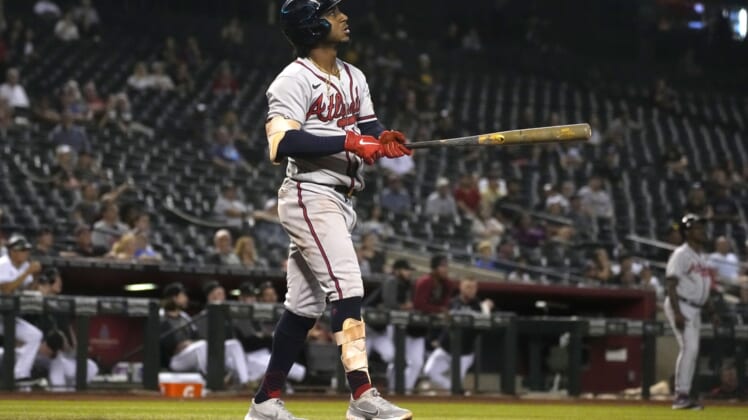 Austin Riley and Ozzie Albies hit two-run homers and Jorge Soler added a solo blast to lead the Atlanta Braves to a 6-1 victory over the Arizona Diamondbacks on Tuesday night at Phoenix.

Freddie Freeman had two hits and scored twice for the Braves, who have won three straight contests. Travis d’Arnaud and Dansby Swanson also had two hits for Atlanta (79-70), which maintained its three-game lead over the Philadelphia Phillies (77-74) in the National League East.

Ketel Marte, Josh VanMeter and Ildemaro Vargas had two hits apiece for the Diamondbacks (48-103), who lost for the seventh time in the past eight games and are tied with the Baltimore Orioles for the worst record in the majors.

Arizona committed three errors and was hitless in nine at-bats with runners in scoring position.

Braves left-hander Drew Smyly (10-4) struck out four and allowed one run on four hits and no walks in 3 1/3 innings. Smyly was the second of six Atlanta pitchers used during a bullpen game.

Arizona right-hander Luke Weaver (3-6) served up three homers in 6 2/3 innings while losing his third consecutive start. He gave up five runs (three earned) and seven hits while striking out seven without issuing a walk.

Soler reached on an error by VanMeter, the third baseman, to open the game, and that allowed Riley to get an at-bat with two outs. Riley took advantage by slugging a 424-foot blast to left-center for his 30th blast of the season.

The Braves increased the lead to 4-0 in the third when Freeman singled with one out and Albies followed with a 400-foot homer to right, his 29th of the campaign.

The Diamondbacks got on the board in the bottom of the third as Daulton Varsho reached on a bunt single, advanced to third on Marte’s single to center and scored on Pavin Smith’s infield out.

Soler made it 5-1 in the fifth when he hit a 394-foot, opposite-field shot to right. It was his 24th homer and 11th in 45 games with Atlanta since being obtained from the Kansas City Royals at the trade deadline.

Arizona loaded the bases in the eighth against right-hander Luke Jackson, but Jake McCarthy flied out the center to end the inning.

Atlanta added a run in the ninth when d’Arnaud doubled to right-center with one out and scored on Swanson’s single to center.