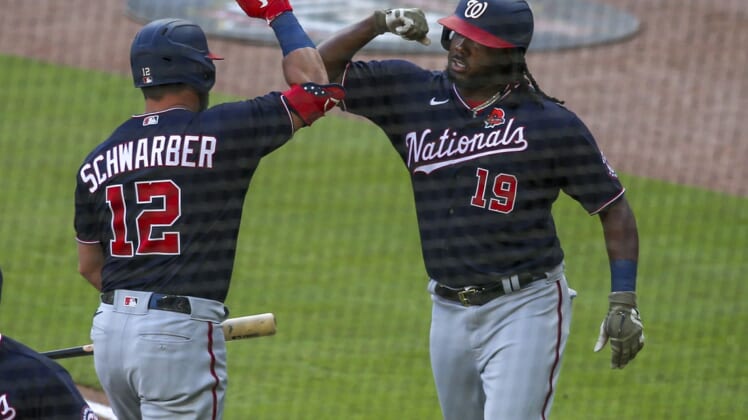 Right fielder Ronald Acuna Jr. hit his 16th home run and the Atlanta bullpen produced four shutout innings on Monday to give the Braves a 5-3 win over the visiting Washington Nationals, who have lost five straight.

Acuna was 2-for-4, scored two runs and drove in one on a solo homer in the second inning, his fourth of the season against Washington and 15th of his career.

Braves starter Charlie Morton (4-2) worked five innings and allowed three runs on six hits, three walks and six strikeouts. It was his first win against Washington since May 23, 2014, when he was a member of the Pittsburgh Pirates.

Morton was backed up by the bullpen, which produced one scoreless inning apiece from Luke Jackson, A.J. Minter, Chris Martin and Will Smith, who struck out one and earned his ninth save in nine tries. The bullpen allowed one hit and no walks in covering four innings.

The Braves got three runs in the first inning on a sacrifice fly from Dansby Swanson and a two-run bloop single by William Contreras. The Braves have scored a league-leading 47 first-inning runs.

Atlanta added a run in the second inning on Acuna’s solo shot into the right-field stands.

Washington cut the lead to 4-3 in the fourth inning on a two-run homer from Josh Bell, his seventh, and another when Ross singled with two outs.

The Braves tacked on a run with two out in the sixth when Guillermo Heredia singled to center to make it 5-3. Atlanta left the bases loaded when Kyle Finnegan struck out Acuna to end the inning.

The Braves improved to 6-1 against the Nationals.