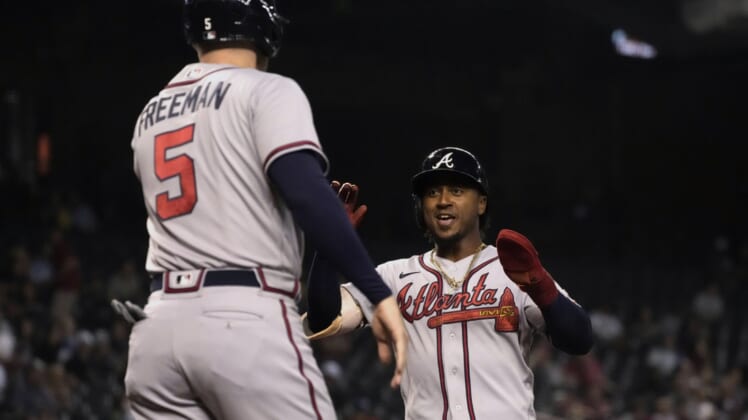 Adam Duvall hit a mammoth homer and Austin Riley had three doubles and three RBIs as the Atlanta Braves trounced the Arizona Diamondbacks 11-4 on Monday night in the opener of a three-game series at Phoenix.

Freddie Freeman had three hits and two RBIs, including a pair of run-scoring hits in Atlanta’s seven-run fifth inning. Duvall crushed a 483-foot homer during the uprising, with the ball cleared the seating in left-center and landing on the concourse.

Ketel Marte had three doubles and Jake McCarthy hit his first career homer for the Diamondbacks (48-102). Arizona has dropped six of its past seven games.

Jorge Soler started the 12-batter Atlanta fifth with a double off Arizona right-hander Humberto Mejia (0-2). He came home on Freeman’s double to right that tied the score at 3.

Ozzie Albies followed with a go-ahead single to right-center. Albies came around on Riley’s booming double off the wall in left-center.

Taylor Widener entered in place of Mejia, and Duvall greeted him by sending a 1-1 fastball into orbit to increase the lead to 7-3. The blast was Duvall’s seventh in his past 12 games and 37th of the season.

Later in the inning, Soler drove in a run on a fielder’s choice before Freeman completed the inning’s scoring with an infield single.

Arizona moved within 9-4 when McCarthy cleared the wall in right field as a pinch hitter in the seventh against Braves right-hander Richard Rodriguez.

Rosario ripped a homer to right off right-hander Brett de Geus in the ninth, his 13th blast of the season. The Braves added one last run on a wild pitch.

Riley hit a two-run double to left-center in the third inning to give Atlanta a 2-0 lead.

Arizona rebounded with three in the bottom of the inning. Marte’s RBI double plated one run and a second scored on a throwing error by Soler, the right fielder. Another scored later in the inning on Ynoa’s wild pitch.