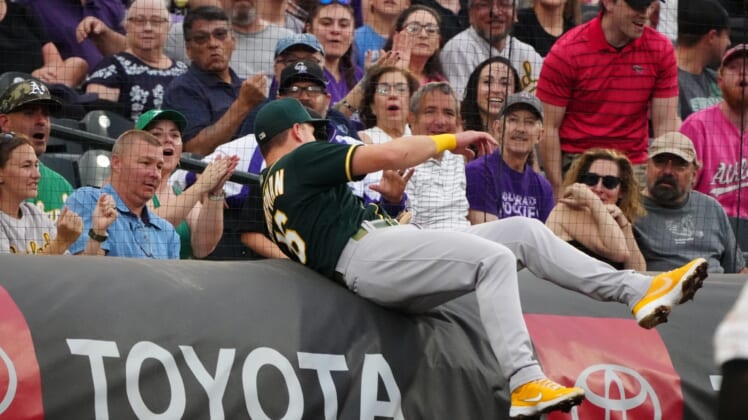 Matt Olson and Chad Pinder hit home runs and left-hander Cole Irvin pitched six innings of one-run ball to end a personal losing streak as the Oakland Athletics made it two wins in a row over the host Colorado Rockies with a 6-3 interleague victory Saturday night.

The homers by Olson, a two-run shot in the first inning, and Pinder, a solo blast in the third, came as part of a five-run, 10-hit Oakland assault on Rockies starter Kyle Freeland (0-1), who worked five innings and left trailing 5-1.

Irvin (4-7) benefitted from the early support, throwing all 85 of his pitches with a lead. He allowed six hits and one walk in his six innings, with five strikeouts.

The victory ended a five-game winless streak for Irvin, who had been charged with losses in four of those five games.

Pinch-hitter Brendan Rodgers hit a two-run homer for the Rockies in the seventh inning off reliever Jesus Luzardo, getting Colorado back in the game at 5-3.

The homer was the 24-year-old Rodgers’ first of his career in his 146th plate appearance.

Luzardo retained the two-run advantage into the ninth, before Oakland tacked on a run when Tony Kemp tripled and scored on a Mark Canha single.

Oakland co-closer Lou Trivino recorded his eighth save with a one-hit ninth.

Olson’s homer was his team-leading 15th of the season. Pinder collected his third.

Canha had three hits while Pinder and Jed Lowrie chipped in with two apiece for Oakland, which won its fourth straight game after a trip-opening loss at Seattle.

Out-hitting the Rockies 12-11, the American League West-leading A’s improved to 5-2 in interleague play.

Rodgers stayed in the game after his pinch homer and singled in the ninth to finish with two hits for the Rockies. Raimel Tapia and Charlie Blackmon also hit two apiece.

The loss was the second straight for Colorado after a four-game winning streak.

Making just his third start of the season, Freeland walked one and struck out one in his five innings.