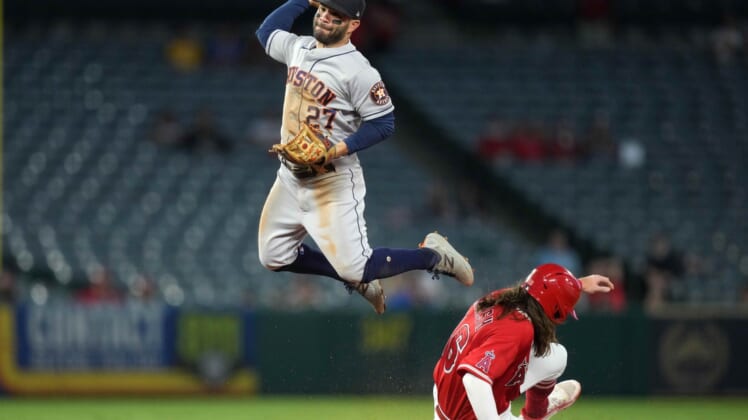 Jose Altuve hit a two-run double in a four-run 12th inning to help the visiting Houston Astros earn a 9-5 win against the Los Angeles Angels on Wednesday night.

The Astros, who have won seven of their past eight games, will attempt to complete a four-game series Thursday. Houston (91-61) trimmed its magic number to clinch the AL West to three.

Chas McCormick began the winning rally with his third hit of the game. He also made two diving catches in right field and threw out Shohei Ohtani at the plate to end the 10th inning.

Houston’s Yordan Alvarez had three hits, including his 32nd home run of the season, and drove in three runs to give him 101 RBIs on the season.

Jack Mayfield hit a three-run double in a five-run seventh inning to help the Angels rally from a 3-0 deficit.

Andrew Wantz blanked the Astros in the 10th and 11th innings. The Angels (72-80) had the bases loaded with no outs in the 10th, then had the winning run at third with one out in the 11th but failed to score each time.

Altuve then doubled down the left field line to plate two more, taking third on the throw. He scored on an Alex Bregman sacrifice fly to make it 9-5.

Luis Rengifo dropped a one-out RBI single into left field, and Kean Wong walked to force in another run and make it 3-2.

Kendall Graveman took over on the mound and gave up the two-out, three-run double to Mayfield as the Angels grabbed a 5-3 lead.

The Astros tied it 5-5 with two runs in the eighth, on an RBI double by Alvarez and a run-scoring single by Yuli Gurriel.

Angels starter Janson Junk gave up three runs in four-plus innings. The right-hander allowed four hits, including two home runs, struck out one and walked one.

Junk walked Altuve to start the game and fell behind Alvarez with one out before serving up a 456-foot home run that made it 2-0.

Junk retired 11 of the next 12 batters before Jason Castro led off the fifth with a home run to make it 3-0.