Yordan Alvarez hit a three-run homer in the first inning, and this time the Houston Astros made the lead hold up, defeating the host Seattle Mariners 8-6 Tuesday night.

On Monday, the Astros scored six first-inning runs and built a seven-run lead before losing 11-8 in the opener of a three-game series.

Kyle Seager and newcomer Abraham Toro homered for the Mariners, who sent relievers Kendall Graveman and Rafael Montero to Houston for reliever Joe Smith and Toro, an infielder, earlier in the day. Smith made his Seattle debut with a scoreless seventh inning, and Toro hit a two-run shot as a pinch hitter in the ninth.

Following Toro’s homer, a walk to Shed Long Jr. and a single by Mitch Haniger brought the potential go-ahead run to the plate with one out. Houston closer Ryan Pressly subsequently got Seager to fly out to left field and Ty France to ground out to first to end the game.

In the first, Houston’s Jose Altuve led off with an infield single and Yuli Gurriel lined a single to left an out later. Alvarez followed with a home run to right. 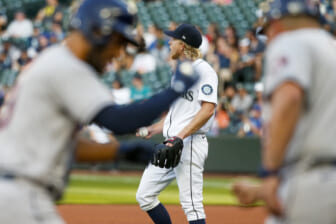 Seager hit a two-run shot in the bottom of the inning after J.P. Crawford led off with a double.

The Astros extended their lead to 7-2 with a four-run fourth.

Carlos Correa led off with a single and took third on Aledmys Diaz’s one-out double. Myles Straw brought home both runners with a double to center. Martin Maldonado followed with a run-scoring single to left. Altuve doubled to left to advance Maldonado to third, and Maldonado scored on a wild pitch.

Houston tacked on a run in the fifth. Alvarez led off with a single and moved to third on Kyle Tucker’s one-out double. Diaz grounded a single to left to make it 8-2.

The Mariners pulled within 8-4 in the sixth on Jarred Kelenic’s two-run single with one out and the bases loaded. McCullers struck out the next two batters to end the threat.