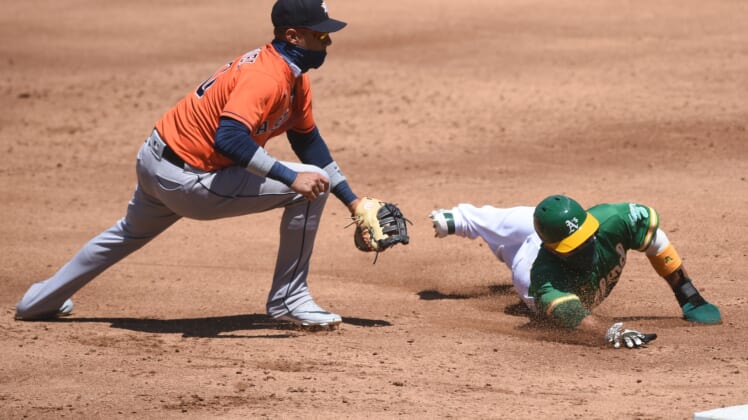 Major League Baseball has warned teams all season that it would drop the hammer on anyone involved in a benches-clearing brawl during the 2020 season. It will now be put to the test after a scuffle broke out during Sunday’s game between the Houston Astros and Oakland Athletics.

Athletics center fielder Ramòn Laureano was already hit once in the game by a pitch. When Astros reliever Humberto Castellanos drilled him in the seventh inning, tempers flared between the two division rivals.

Laureano immediately started shouting towards Castellanos and pointing in his direction, as catcher Martín Maldonado attempted to calm him down and guide him to first base.

Things seemed to calm down between the two clubs for a few seconds, but it didn’t take long for that to change. Astros hitting coach Alex Cintron started yelling at Laureano and with the stadium quiet, Laureano heard every word.

The 26-year-old outfielder had enough, charging towards the Astros’ dugout and toward their pitching coach. He was quickly thrown to the ground with players from both teams rushing together in a scuffle.

It wouldn’t be a surprise if Laureano receives a significant suspension for his role in the scuffle, while a few players on both teams could also face discipline. One thing is for certain, MLB will use this to send a message to the entire league that benches-clearing brawls won’t be tolerated amid the COVID-19 pandemic.