Nolan Arenado and Dylan Carlson each homered and Kwang Hyun Kim won his fifth straight start as the St. Louis Cardinals edged the visiting Chicago Cubs 3-2 in the finale of a four-game series on Thursday.

Kim (6-5) allowed two runs on two hits, with seven strikeouts, over six innings. Alex Reyes worked around a two-out walk in the ninth for his 23rd save.

Jake Marisnick drove in two runs for Chicago, which lost three of four in the series and has dropped 23 of its last 32 games.

Carlson went 3-for-4 with two doubles. He began the scoring with a leadoff homer in the bottom of the first off Adbert Alzolay (4-10), a 420-foot blast to right field.

Alzolay gave up three runs on four hits over six frames. He struck out eight and walked three while throwing 102 pitches.

The Cardinals added to their lead with two outs in the third when Arenado’s two-run homer scored Carlson, who had doubled with one out.

Kim’s scoreless streak ended at 24 2/3 innings after Marisnick snapped an 0-for-16 skid with a two-run double in the fourth.

St. Louis starting pitchers are 4-1 with a 1.93 ERA across the last eight games. 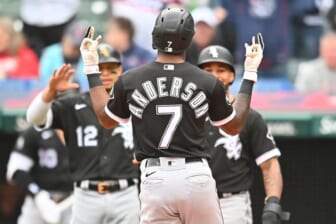 Cubs outfielder Kris Bryant, who has not started since Tuesday due to hamstring fatigue, drew a walk as a pinch hitter in the eighth inning.

The Cardinals held Chicago to three hits and turned in a pair of defensive gems in the seventh inning, on diving catches by left fielder Tyler O’Neill and center fielder Harrison Bader.

St. Louis received a scare in the seventh when shortstop Edmundo Sosa was hit in the helmet by a 95 mph fastball from Dillon Maples. Sosa stayed on the ground for several minutes before remaining in the game.