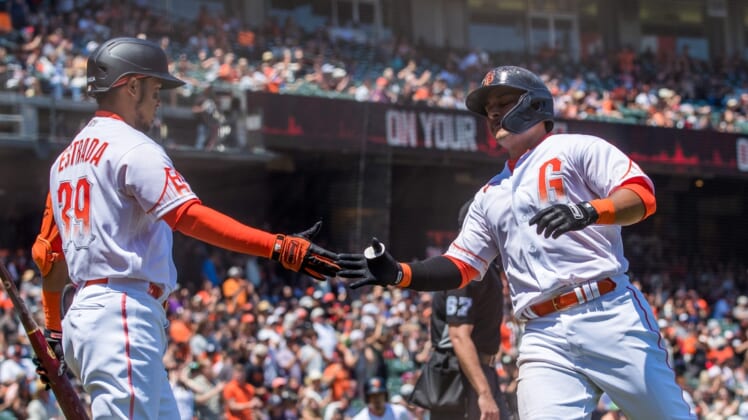 Right-hander Anthony DeSclafani coasted through six shutout innings after the San Francisco Giants put together big innings in the first and third Saturday afternoon en route to a 10-4 victory over the visiting Washington Nationals.

Thairo Estrada went 4-for-5 with three RBIs while All-Star Brandon Crawford collected a single, a double and his 18th home run for the Giants, who won their third straight.

DeSclafani (10-3) recorded a career-best 10th win by limiting the Nationals to three singles and a walk in his six innings. He struck out six.

The club leader in wins became the Giants’ first 10-game winner in a first half since Johnny Cueto (13-1) and Madison Bumgarner (10-4) both accomplished the feat in 2016.

The Giants gave him an immediate lead with a three-run first that featured four hits. Donovan Solano drove in the first run with a single to left field, before Crawford hit a sacrifice fly and Estrada added a run-scoring infield single.

The Giants made it an early laugher with a five-run third that was ignited by a ground-rule double by Darin Ruf. Crawford, Joey Bart, Estrada and Austin Slater all had RBI singles in the uprising, while Mike Yastrzemski chipped in with a sacrifice fly.

Nationals starter Jon Lester (2-4) couldn’t finish the third. He was charged with eight runs (three earned) on nine hits in his 2 2/3 innings. He walked two and struck out one.

Crawford’s homer, a solo shot, came in the sixth and made him the first Giant since Barry Bonds in 2004 to hit 18 or more home runs in a first half. Bonds hit 23 that season, one year after bombing 30.

The 18 homers are the most ever hit by a Giants shortstop in a first half. Only seven Giants shortstops have ever hit more in a full season, a list topped by Rich Aurilia, who hit 36 of his 37 homers at that position in 2001.

Estrada capped the San Francisco scoring with an RBI single in the eighth.

Bart and Slater had two hits apiece and Ruf scored three times for the Giants.

Alcides Escobar launched a two-run triple and scored on a wild pitch in a three-run seventh that got Washington on the scoreboard. Escobar finished with two hits.

Jakson Reetz, a catcher promoted from Triple-A earlier in the day, doubled as a pinch hitter in his first major-league at-bat in the ninth for the Nationals. He eventually scored the day’s final run on an infield out by Josh Harrison.