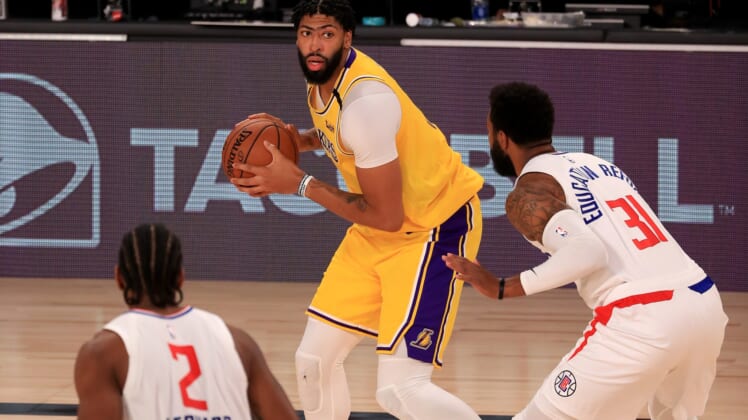 July 30, 2020; Lake Buena Vista, USA; Anthony Davis #3 of the Los Angeles Lakers looks to pass against Marcus Morris Sr. #31 of the LA Clippers during the third quarter of the game at The Arena at ESPN Wide World Of Sports Complex on July 30, 2020 in Lake Buena Vista, Florida. Mandatory Credit: Mike Ehrmann/Pool Photo via USA TODAY Sports

The Los Angeles Lakers were struggling from the field during the third quarter of their game against the Los Angeles Clippers Thursday night in Orlando.

That’s when star Lakers forward Anthony Davis decided to go off. Davis dropped 14 points in the third quarter alone to pull his Lakers within one point heading into the final stanza.

This included eight consecutive points. Two three-pointers capped off by a jumper over Clippers forward Patrick Patterson. Check out Mr. Davis jawing at the Clippers bench after he hit that last shot.

NBA of petty. How we’ve missed you.

Davis would hit 8-of-18 from the field for 32 points through three quarters, keeping his Lakers close in a game that LeBron James has struggled with his shot.

This is what makes the Lakers so darn dangerous. Even after four-plus months of inaction, the combination of Davis and James continue to prove that they will be hard to beat. If one player doesn’t have it on a certain night, the other player will step up.