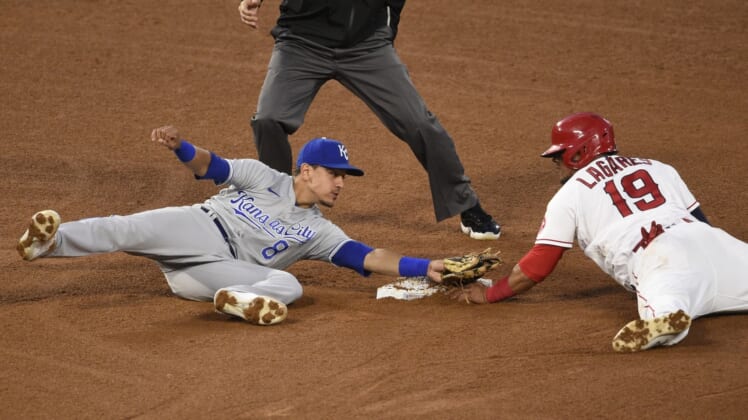 The Los Angeles Angels scored four runs in the first inning and cruised to a 8-3 victory over Kansas City on Monday in Anaheim, Calif., providing a not-so-warm welcome to highly touted Royals pitcher Jackson Kowar.

Kowar was making his major league debut after pitching impressively at Triple-A Omaha this season — 5-0 with a 0.85 ERA in six starts. He didn’t allow more than one run in any game for Omaha, but he yielded four runs Monday while failing to make it out of the first inning.

It didn’t start out badly for Kowar, who retired Justin Upton on a grounder to first to begin the game. However, he walked Shohei Ohtani, then threw a wild pitch to allow Ohtani to take second.

Kowar’s third wild pitch moved Stassi to second before Jose Iglesias (RBI groundout) and Juan Lagares (RBI single) drove in the third and fourth runs of the inning, knocking Kowar out of the game.

Angels starter Dylan Bundy, the club’s Opening Day starter, got his first win of the season after losing his first six decisions. He gave up two runs on six hits in 5 2/3 innings. Bundy fanned two without issuing a walk.

Hunter Dozier had three hits for Kansas City while Salvador Perez had two.