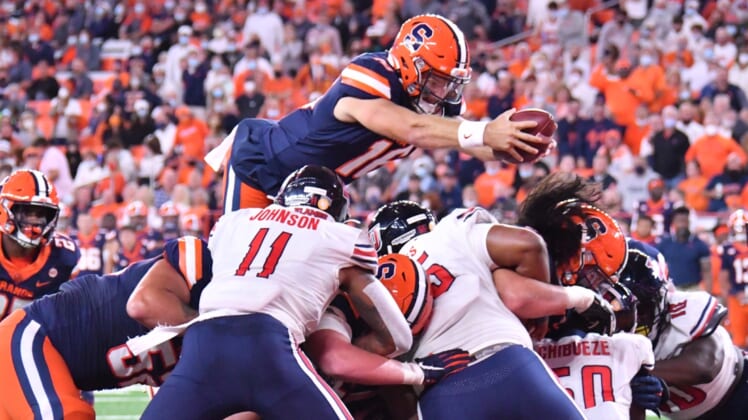 The Orange (3-1) needed Szmyt’s game-winner after blowing a pair of 14-point leads and the kick was set up by a terrific defensive sequence when Liberty appeared to have the momentum.

With 3:35 remaining at the Liberty 37, Flames quarterback Malik Willis was flushed out of the pocket. Syracuse lineman Cody Roscoe chopped the ball out and the fumble was recovered by linebacker Mikel Jones at the Liberty 30.

Syracuse running back Sean Tucker gained 168 yards on a career-high 31 carries and also had a touchdown. Tucker also finished with 195 yards of total offense as Syracuse totaled 225 yards on the ground.

Garrett Shrader made his first start for Syracuse and completed 6-of-15 passes for 77 yards and also had a pair of TD runs.

The Liberty got within 14-7 when Willis connected with Shedro Louis for a 7-yard TD with 93 seconds remaining but Syracuse opened a 21-7 lead with 9:46 remaining in the third when Shrader faked a handoff and rushed up the middle for a 10-yard score.

Liberty finally got a drive going and was within 21-14 on a 23-yard TD by CJ Daniels, who just stayed in bounds with 2:57 remaining.

The Flames tied it at 21-all 29 seconds into the fourth when Willis connected with DeMario Douglas for a 33-yard strike. Liberty nearly took its first lead but Douglas’ 4-yard TD was overturned via replay and Syracuse’s defense stuffed Willis on 4th-and-goal from the 2-yard line.