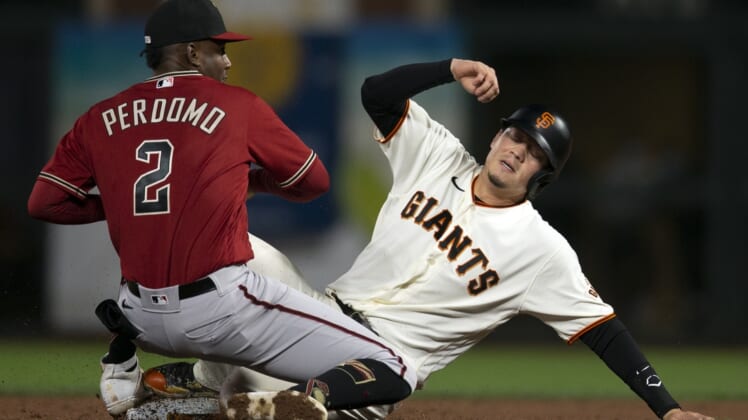 Left-hander Alex Wood combined with three relievers on a four-hit shutout and the San Francisco Giants used small ball to produce the only run in a 1-0 victory over the visiting Arizona Diamondbacks on Wednesday night.

The Giants (104-54) improved to 50 games over .500 and temporarily increased their lead atop the National League West to 2 1/2 games over the second-place Los Angeles Dodgers, who were still playing the visiting San Diego Padres when the San Francisco game ended.

Wood limited the Diamondbacks (50-108) to three hits in six innings without issuing a walk. He struck out six.

Wood then worked around a second Giants error in the sixth before calling it a night.

Dominic Leone (4-5), Jarlin Garcia and Camilo Doval took it from there, combining for four strikeouts and just one hit allowed over the final three innings. Doval was credited with his second save in two nights after retiring the side in order in the ninth.

The Giants scraped together their only run off the Diamondbacks’ third pitcher, Noe Ramirez (0-2), after Tommy La Stella led off the seventh with a single.

Kelly allowed three hits and four walks in his five innings, but kept the game scoreless. He struck out four.

Buster Posey reached base on all four plate appearances with two singles and two walks for the Giants, who improved to 16-2 against the Diamondbacks this season.

Perdomo had two of Arizona’s four hits in a game that did not feature an extra-base hit.